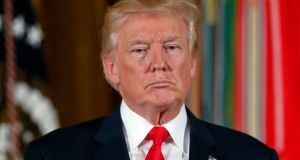 President Donald Trump: his nominee for the job of US ambassador to the Netherlands was born in Groningen before emigrating with his family to the US aged three. Photograph: Pablo Martinez Monsivais

Leaving aside the controversial president who’s proposing him, it would be hard to find a person less at one with the deeply ingrained liberal ethos of the Dutch than the man who has just been nominated as the next United States ambassador to the Netherlands.

Of all the possible candidates for this low-key diplomatic posting, a conservative former congressman who’s been an outspoken opponent of same-sex marriage has been named as ambassador to the first country in the world to legalise same-sex marriage.

In the vortex of accusation and counter-accusation combined with a hapless inability to tell conspiracy from political naivety that has enveloped the first six months of the Trump White House, picking an ambassador to the Netherlands couldn’t have merited more than one iota of attention.

Just as America’s public is living in a constant state of surprise and anticipation, so the Dutch public has absolutely no idea how to take this.

It’s worth noting immediately that President Donald Trump’s nominee – Pete Hoekstra (63) – has one big plus for the job: he was born here in the Netherlands, in Groningen, in the northeast of the country, before emigrating with his family to the US at the age of three.

However – as opponents of the nomination are making clear – quite a lot has changed in Holland since the Hoekstra family left in 1957.

The Dutch legalised abortion in 1984, allowing terminations to be carried out on demand until the 21st week of pregnancy, or later in the case of a medical emergency. The effect has not been to open the proverbial floodgates. The Dutch currently have the lowest abortion rate in the world.

Same-sex marriage was legalised in 2001, after a landmark equal rights law enacted in 1993 included sexual orientation as a classification legally protected against discrimination across Dutch society – in everything from employment to schooling and housing.

The Netherlands’ drugs policy is among the most liberal in Europe too. Cannabis can be bought in “coffee shops” as part of a policy of containment and non-enforcement aimed at focusing resources on harder drugs and on rehabilitating addicts.

Prostitution is legal and regulated here too, as is euthanasia.

This will be a problematic social environment for Mr Hoekstra – one of the founders of the conservative Tea Party movement – whose nomination must still be approved by the Dutch government and confirmed by the US Senate.

He was a Republican member of the House of Representatives for Michigan from 1993 to 2011 – and during that time opposed same-sex marriage, voted repeatedly to limit women’s rights to abortion, and was a vocal advocate of the death penalty.

He’s been guest speaker at congresses organised by anti-Islam think tank the American Freedom Alliance, an organisation dedicated to upholding “western values and ideals” at least one of whose conferences has also been attended by Dutch far-right leader Geert Wilders.

And he’s also spoken about a “secret jihad” in Europe which, he claimed, was causing chaos in the Netherlands – with cars being set on fire and some areas being reduced to “no-go zones”.

Asked in 2006 if he feared the Netherlands had become a modern-day “Sodom and Gomorrah”, he replied: “I don’t think that at all. It’s clear that the Netherlands has made different choices to the USA in a number of areas. But as a foreign politician you must respect that, even if you don’t agree.”

Despite the public bemusement, the political response here has been wary.

MEP Sophie in ‘t Veld, of prime minister Mark Rutte’s Liberal Party, warned: “We will certainly remind him that his roots lie in a country that values tolerance, equality and inclusion . . . We expect the representative of our friend and ally, the United States, to respect our values and to show that respect in all his acts and words.”

Dutch daily newspaper De Volkskrant has been less diplomatic and more stinging. Trump, its headline proclaimed, “is sending a Dutchman to the Netherlands – but he’s a Dutchman from the 1950s”.