Guineans to vote on new constitution amid simmering tension

President Alpha Condé, who described himself as the ‘Obama’ of Guinea, seeks to cement power 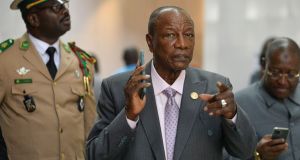 Alpha Condé arrives at the African Union headquarters in Addis Ababa, Ethiopia, during a recent session of the Assembly of the African Heads of States. Photograph: Michael Tewelde/AFP via Getty Images

On Sunday, Guinea’s citizens will vote for a new constitution which could see the country’s first democratically-elected president cement his power and extend his rule by another two terms.

President Alpha Condé, who turns 82 next week, became head of state in 2010. He described himself as both the Nelson Mandela and the Barack Obama of Guinea. “I will be Mandela for what he did for freedom fighting and Obama for what he’s done for hope,” the president told the Guardian in 2012.

Mr Condé also boasted that the path to democracy in the West African country of roughly 13 million people was now “irreversible”.

In his early years in power, Mr Condé was advised by both Tony Blair and George Soros.

Now Mr Condé says a new constitution is necessary, and the proposed one includes progressive reforms including a ban on female genital mutilation and a requirement that no gender makes up more than two-thirds of the parliament.

However, the prospect of Mr Condé’s rule being extended has been met with ongoing protests and accompanying arrests. Since October, at least 30 people have died. The situation is expected to get worse, with presidential elections expected to take place within the next year.

“Ethnic divisions are deepening, with increasing incitement to hatred and violence on social media and at political rallies,” said Michelle Bachelet, UN High Commissioner for Human Rights, on Thursday.

Earlier this month, the European Parliament passed a resolution calling for urgent measures in Guinea make sure the right to demonstrate freely is respected and that efforts are made to prevent violence from escalating. The EU also asked for authorities to investigate and prosecute members of the security forces where there is evidence of criminal responsibility.

“Guinea is very significant in two ways,” said David Kode, the head of advocacy and campaigns at Civicus, a Johannesburg-based non-profit focused on strengthening civil society.

“Guinea is faced with a unique opportunity to facilitate its first ever democratic transition if President Alpha Condé respects the current constitution and does not stand for a third term,” Kode said. “However if he goes ahead and changes the constitution and hangs on to power, the democratic gains made over the last 10 years will be eroded.”

Pre-emptive doubt has already been cast on the results of Sunday’s referendum – in which Guineans will also vote for members of parliament. Organisation internationale de la Francophonie, an international organisation representing French-speaking countries, withdrew a poll-monitoring mission after identifying 2.49 million “problematic” entries on the electoral register.

Other African countries where the constitution has been changed to allow a president to extend term limits include Chad, Comoros, Burundi, Djibouti, Rwanda, Cameroon, Togo, Equatorial Guinea, the Republic of Congo and the Ivory Coast.

Pointing to this, Mr Kode said there seems to be more of a trend towards authoritarianism than towards democracy across the African continent, despite the recent fall of dictators in countries including Sudan, Zimbabwe, and The Gambia.

“Even countries that used to be democratic are displaying authoritarian tendencies,” he said.