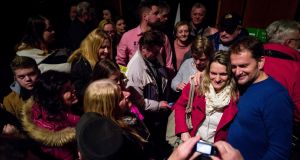 Igor Matovic, leader of anti-graft political movement Olano, with supporters during a campaign meeting ahead of the country’s parliamentary election. Photograph: Vladimir Simicek/AFP via Getty Images

Slovakia’s parliamentary election on Saturday is set to be a battle between left- and right-leaning populists, as ruling party Smer tries to fend off a fast-rising Olano party that aims to take power at the head of a new coalition government.

Centre-left Smer (Direction) has governed for 12 of the last 14 years, but Olano (Ordinary People and Independent Personalities) and several smaller parties say Slovakia now needs dramatic change to fight crime and corruption at all levels.

The wild card could be the ultra-nationalist People’s Party Our Slovakia (LSNS), which is forecast to finish third and could offer to co-operate with Smer in the new parliament to help it retain control of the country of 5.4 million.

Smer’s popularity has fallen sharply since investigative journalist Jan Kuciak and his fiancee Martina Kusnirova were shot dead at his house in a village outside the Slovak capital, Bratislava, in February 2018.

Kuciak wrote about links between politics, business and organised crime, and in the wake of his killing long-time Smer premier Robert Fico resigned as thousands of Slovaks protested over his failure to tackle graft and impunity.

The investigation into the double murder revealed contacts between criminals, state officials and senior figures in Smer, but a defiant Mr Fico continues to lead the party and still exerts huge influence over the government.

“Together we have a historic chance to conquer Fico’s Smer, an organised crime group that has ruined our Slovakia for 12 years,” Olano leader Igor Matovic wrote on Facebook on Friday. “But nothing is certain yet, every vote counts.”

Mr Matovic (46) says that as well as fighting graft and defending the rule of law, Olano would also increase funding for key public services and ensure Slovakia maintained good relations with Brussels, rather than following the Eurosceptic governments of neighbouring Hungary and Poland into confrontation with the EU.

A coalition led by Olano would probably include the liberal Progressive Slovakia/Together alliance that backed lawyer and activist Zuzana Caputova’s successful bid for the Slovak presidency last year, and the conservative For the People party created by Andrej Kiska, her predecessor as head of state.

Some analysts predict arduous coalition talks after the election and potential instability in a broad Olano-led alliance, however, and they question the outspoken Mr Matovic’s ability to keep the peace with other party leaders.

“Matovic is now a threat to the whole of Slovakia,” Mr Fico said on social media on Friday, accusing his rival of turning politics into a “circus”.

“If you have a different idea of how Slovakia should be run, come with us tomorrow to vote responsibly,” he added.

Echoing the anti-immigration leaders of Hungary and Poland, Mr Fico declared: “Turkey is letting migrants into Europe. Choose a responsible government that won’t bring them here.”