Eagerly-awaited Netanyahu corruption trial to get under way 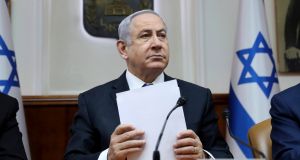 An Israeli court last Wednesday ordered Benjamin Netanyahu, above, to appear for the opening of his criminal trial in Jerusalem on Sunday. File photograph: Gali Tibbon/Pool via AP

Exactly a week after being sworn in for his fifth term as Israeli prime minister, Binyamin Netanyahu will on Sunday appear at the Jerusalem district court at the start of one of Israel’s most eagerly-awaited trials, becoming the first sitting prime minister in the country’s history to stand trial.

He will plead innocent on all counts of bribery, fraud and breach of trust, having steadfastly maintained that the three corruption scandals are nothing more than a witch hunt by the left, supported by the elitist judiciary and media, in an effort to topple him from power.

In the first of the three, known as Case 1,000, Mr Netanyahu and his wife,Sara, are alleged to have received gifts worth €230,000, including cigars, pink champagne and jewellery, from wealthy friends.

Case 4,000 is the most serious of the three and the only one involving bribery allegations. It involves claims that Mr Netanyahu, when he also served as communications minister between 2015 and 2017, ensured financial benefits amounting to hundreds of millions of euro for Bezeq, Israel’s largest telecommunications company, which was owned by Shaul Elovitch, in return for favourable coverage for Mr Netanyahu and Sara on the popular news website Walla!, also owned by Mr Elovitch.

Mr Netanyahu can continue to serve as prime minister during the trial and will be required to step down only if found guilty and after an appeal process.

Getting to the start of the trial took years and the judicial proceedings are also expected to drag on for at least two more.

The court on Wednesday denied a request by Mr Netanyahu to be absent from Sunday’s opening, saying he must abide by the practice of hearing the charges in person.

The run-up to the trial has seen increasing attacks on the judiciary from Netanyahu supporters, prompting the police to increase the security detail for the judges. One minister from Mr Netanyahu’s Likud party this week referred to attorney general Avichai Mandelblit as an “alleged criminal”.

Law professor Yedidia Stern, of the Israel Democracy Institute, says the trial has increased the divisions in society, but Israelis should be proud that even the ruler is subject to the rule of law.

“Netanyahu will show up, like an ordinary citizen, and face three judges who have the authority to rule – in the name of all of us – whether he is innocent or a criminal. That is the unadulterated illustration of equality before the law.”

1 Tyrone midwife on the cover of Vogue magazine
2 Barack Obama urges those protesting in US to seize the momentum
3 Luke ‘Ming’ Flanagan bares his bottom half to European Parliament
4 With Lincoln looking on, the crowd dropped to their knees as 7pm approached
5 Covid-19: Varadkar downplays expectation of accelerated lifting of restrictions
Real news has value SUBSCRIBE