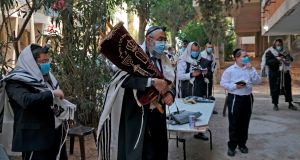 Ultra-Orthodox Jews are pictured praying outside a synagogue in Bnei Brak, near Tel Aviv, amid measures put in place by Israeli authorities in a bid to stop the spread of Covid-19. Photograph: Menahem Kahana/AFP via Getty Images

Israel will implement overnight curfews from Tuesday night on some 40 cities and communities hit hard by coronavirus, after prime minister Binyamin Netanyahu backed down from plans to impose full lockdowns there following angry opposition from his ultra-Orthodox coalition partners, who warned of huge resistance to such measures.

Some 5,000 police will deploy in and around the so-called red localities in question, supported by 500 soldiers, to ensure the night-time curfews are maintained.

Mr Netanyahu prided himself on Israel’s successful response to its initial outbreak of coronavirus, saying other countries were following its example, but after the lifting of restrictions a second wave caught health authorities off guard.

Data from Johns Hopkins University shows that Israel now has the highest rate of new coronavirus infections per capita in the world, and the number of fatalities from Covid-19 in the state passed the 1,000 mark a few days ago. The resurgence of the pandemic there continues at an alarming pace and figures on Monday showed the infection rate of those tested reaching 12 per cent.

In response, the country’s new coronavirus co-ordinator, Prof Ronni Gamzu, introduced a “traffic light” classification dividing areas into red, amber and green according to infection rates. A disproportionately high number of the red areas are in Arab and ultra-Orthodox communities.

Plans to introduce a total lockdown on the red areas were met with an angry response from the ultra-Orthodox community, a key ally for Mr Netanyahu.

Mayors of four ultra-Orthodox cities sent Mr Netanyahu a strongly worded letter warning that there would be a civil rebellion by the residents if a complete lockdown was imposed.

“We will not forget the injustice done to us. We won’t forget who was the man who with his own hand, time after time, took decisions that turned us into disease-spreaders and enemies of the people,” the letter said.

Mr Netanyahu backed down, replacing a lockdown with a curfew.

Responding to the move, opposition leader Yair Lapid said that the government must resign. “This government is no longer merely out of touch, it’s dangerous as well. Teams of experts, doctors, economists, public policy and local government people meet, devise work plans, strike a balance between health and finance, and then the politicians turn it around in a second.”

Health officials warned that the latest U-turn will not flatten the coronavirus curve, which will leave the government with no choice but to impose a full countrywide lockdown for at least three weeks.