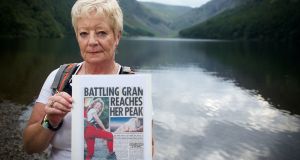 Siobhan Cullen told the documentary that before she died her mother told her, “I have the thirst of death on me”. Photograph: RTE

The daughter of a women who died from Covid-19 has said it is a “horrific death” and she does not want to see anybody else die from it.

Siobhan Cullen is one of the relatives who feature in a new documentary by RTÉ entitled Love and Loss in a Pandemic which features the stories of eight people who died from the virus.

Ms Cullen’s mother Eileen O’Neill (88) from Loughlinstown, Co Dublin, died in St Vincent’s Hospital on March 18th from Covid-19. She was one of the first people in die from the disease in Ireland.

Ms Cullen told the documentary that before she died her mother told her, “I have the thirst of death on me”.

“She was very frightened and very emotional. Mum fought for every last intake of breath. She literally could not get a breath. I had to hold her hand wearing double gloves and with double face shields. She struggled until the very end,” Ms Cullen said.

At the time of her mother’s death, Ms Cullen tweeted regular updates to her followers stating that Covid-19 was a serious disease and that people who did not take it seriously should “cop on”.

The families of two of the eight healthcare workers who have died to date in the pandemic participated in the documentary.

Catherine Hickey was just 51 when she died from Covid-19 on April 15th at the height of the pandemic.

She was part of the cleaning staff at St Luke’s Hospital in Kilkenny and was one of two members of staff in the hospital to die from the disease.

Her husband Joe spoke of the loneliness of the funeral ritual. “She was buried at 2.30pm on the Friday and we were sitting in the sitting room at 4pm on our own.”

He said they had dreamed of living in Torremolinos in Spain”with the sun on our backs” as his wife lived for their holidays together and for their family. Mr Hickey said his greatest regret was not to be alive to see her first grandchild being born.

The daughter of Pakistani doctor Dr Syed Waqqar Ali said her father’s last words to his family was “be strong for me”.

Dr Ali (60) died on July 21st from Covid-19 after spending three months in intensive care. He contracted the illness while working as a locum doctor on the frontline in the Mater Hospital.

He insisted on doing his duty as a doctor though his family feared for his safety.

He was so ill at the end that he could only communicate through an alphabet board as he was unable to speak.

“We are very private people. When my father was put on the ventilator, I sent out messages to people to pray for him,” she recalled.

“He didn’t want to let on the severity of it. He was so sick and so ill, but he kept asking, ‘are you guys okay?’”

Cork man Ian O’Sullivan fell into an induced coma because of Covid-19. When he woke up he discovered that his 84-year-old mother Mary had also died from the disease.

Mother and son ended up on the same ward in Cork University Hospital. “It was a fairly scary time,” he said. “Coming out of a coma feels more like a dream rather than real life. That’s why it didn’t sink in.” Love and Loss in a Pandemic is on RTÉ One at 9.35pm and on the RTÉ Player at rte.ie/player

Coronavirus: 306 new cases and one further death reported by Nphet 17:57
Pat Finucane murder: British government will not establish public inquiry 17:44
Seventeen life-sentence prisoners released last year 17:41
Man who stole more than €95,000 in social welfare under false names jailed 17:30
Three jailed over refusal to pledge to stay away from farm to remain in prison 17:20