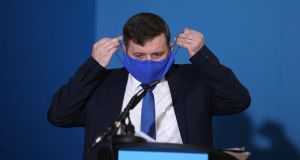 Northern Ireland’s health minister Robin Swann said there were ‘undoubtedly questions that will have to be answered by the Trust in relation to these outbreaks’. Photograph: Matt Mackey/PA Wire

A fourth patient with Covid-19 has died at a Co Armagh hospital which is battling an outbreak of the virus.

The Southern Health and Social Care Trust confirmed on Monday that the patient, who was being treated in the haematology ward at Craigavon Area Hospital and who had tested positive for coronavirus, had died that morning.

Two other patients with coronavirus who were being treated in the same ward died last week. An additional patient on the ward who also had Covid-19 also died, but the Trust said coronavirus was not the primary cause of death.

The chief executive of the Trust, Shane Devlin, said he extended his “deepest sympathy to the patient’s family and friends.”

The North’s health minister, Robin Swann, has asked the Trust to initiate an investigation “immediately”, he told the Assembly on Monday.

The level three Serious Adverse Incident Review - the highest level of investigation available - will be independently chaired and its findings made public, Mr Swann said.

He was before the Assembly to answer an urgent oral question on the outbreaks at Craigavon hospital tabled by the Sinn Féin MLA John O’Dowd.

Mr Swann said there were “undoubtedly questions that will have to be answered by the Trust in relation to these outbreaks”, but he had been assured that “everything that needs to be done in relation to infection prevention and control is being done.”

Any lessons would be shared with all the North’s health and social care trusts as they emerge, he said.

However he warned that services would inevitably be affected at the hospital as it sought to tackle the virus. “Our focus must be on bringing the outbreak under control,” he said.

As of Friday clusters had been identified among patients and staff in the haematology ward and in a short stay ward, and there had been case in its emergency department. At least 50 members of staff are off work and self-isolating.

Figures released by the North’s department of health (DoH) on Monday showed there was one more coronavirus-related death in Northern Ireland over the weekend.

The total number of fatalities recorded by the department now stands at 565.

On Monday 141 new cases of coronavirus were confirmed, bringing the total number of cases identified since the start of the pandemic to 7,868.

It is the third day in a row that more than 100 people have tested positive for the virus. In the last seven days 639 new cases of Covid-19 have been identified in the North.

The minister expressed his concern over the increasing number of cases, particularly in Belfast, and said if there was an outbreak in a geographical area which could not be brought under control he would recommend to the Executive a localised lockdown either by council area or postcode.