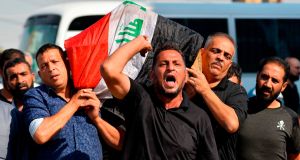 Mourners carry the casket of an Iraqi protester at his funeral in the central Iraqi city of Najaf on November 5th, 2019. Photograph: Haidar Hamdani/AFP

A dozen Iraqis have been killed in the capital and the south over the past three days in popular protests, adding to the toll of more than 250 martyrs during the latest unrest in a country struggling with the lack of adequate electricity, water, healthcare, schools and jobs – but rich in oil revenues.

UN envoy Jeanine Hennis-Plasschaert wrote on Twitter: “Violence only begets violence, peaceful demonstrators must be protected. It is high time for national dialogue.” Her call for dialogue has fallen on deaf ears.

Iraq’s protests against poverty, launched early last month by desperate Shia men from east Baghdad, have spread to cities of the south and grown into a mass movement against mismanagement, corruption and the US-installed, pro-Iranian, Shia fundamentalist-dominated government which has reigned since 2003.

Protesters seek to topple the government, remove the political elite, halt corruption and change the sectarian system of governance, which has transformed Iraq into a failed state. “We want a country,” is the protesters’ cri de coeur.

Women, school children and members of the middle class have poured into the streets, braving tear gas, water cannon and live rounds. Sunnis in Anbar province and Mosul have been threatened and arrested for posting on social media solidarity messages and calls for civil disobedience.

Iraq’s first-ever exercise in people power has become non-sectarian, nationalist and anti-external interference in Iraqi affairs. Iraqis demonstrate in streets and squares of main cities, build barricades on roads and bridges, and clash with security forces near sensitive sites, including Baghdad’s fortified Green Zone, which houses the government and foreign embassies.

Protesters stage peaceful sit-ins at oil fields, surround provincial offices and block access to Iraq’s ports, causing billions of dollars in losses. Iraqis compare the uprising to the 1920 revolt against Britain after it seized control of Iraq following the demise of the Ottoman Empire.

Protesters, who regard themselves as “the people”, have the support of Iraq’s influential Shia Grand Ayatollah Ali al-Sistani, president Barham Salih and nationalist cleric Muqtada al-Sadr, whose party is the largest parliamentary faction. The teachers’ syndicate has shut down schools across the country and other trade unions have gone on strike.

Although Tehran’s regional rival, Washington, also backs the government, the ayatollah blamed the US and its allies for creating chaos in Iraq and Lebanon, called on protesters to effect change in legal ways, and praised Tehran’s crackdown on the 2019 demonstrations against economic hardship.

Protesters responded by fire-bombing the Iranian consulate in the Shia holy city of Karbala, prompting Tehran to ban Iranians from travelling to Shia holy sites in Iraq, depriving Iraq of pilgrimage revenues.