US president keen on sending strong message to Assad, but at what potential cost? 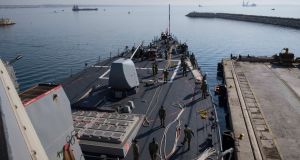 US president Donald Trump ordered an attack on Syria in April last year in response to a chemical attack, when 59 US Tomahawk cruise missiles hit the al-Shayrat airbase.

Since that failed to deter the Syrian president, Bashar al-Assad, and regime forces from using more chemical weapons, the decision Trump has to make now, following the suspected gas attack in Douma on Saturday, is whether to launch a more punitive strike.

At the time, the US claimed to have destroyed 20 planes, which the defence secretary, James Mattis, described as 20 per cent of the Syrian operational air strength and to have seriously degraded the base. But other reports challenged this, saying Syrian aircraft were taking off from the base only hours later.

If Trump needs to send a stronger message this time, one of the options is the total destruction of Syria’s air force.

Having fought against Syria regularly over the past 70 years, including frequent raids in the past two years, the Israeli air force knows better than anyone else Syria’s strength.

An Israeli military analyst, Reuven Ben-Shalom, who spent 25 years in the Israeli Defence Forces, is reluctant to sound boastful but could not help in the end but describe Syria’s military capability as “a joke”.

To take just one indicator, Syria has 15,000 personnel in its air force, according to the Military Balance published by the London-based International Institute for Strategic Studies; Israel has 34,000 and the US 316,000.

But he added a crucial caveat: the potential confrontation was not just about military capability.

“The main issue is the umbrella the Russians have given the Syrians. The Russians are inside Syria.”

The risk for the US would be an attack that would start the third World War, he said.

A defence analyst, Jeremy Binnie, the Middle East editor at Jane’s by IHS Markit, said: “The US Navy could potentially use Tomahawk cruise missiles to do a larger version of last year’s retaliatory strike on al-Shayrat airbase, if it has a sufficient number of destroyers and attack submarines within range.”

Likely targets would be aircraft and other assets that are difficult to repair, rather than the bases themselves.

Binnie said it would seem fair to say the US could carry out a strike four times as large as the one a year ago.

“So if the al-Shayrat strike destroyed 20 per cent of the Syrian air force, as claimed, then one four times as large would in theory finish it off, but then you would have to factor in any improvement in Syrian air defences. At the same time, there is a risk that if you say you have destroyed the Syrian air force, but miss a few aircraft, you might look a bit silly when they are seen flying.”

Syria has been reinforced by the Russian S-400 missile system.

Earlier this year, Syria claimed to have brought down an Israeli F-16 fighter that crashed while returning from a raid.

But Ben-Shalom, a lieutenant-colonel in the Israeli reserves, pointed out things go wrong in war and the downing of the plane had probably been due to a combination of events. In the end, Israel retained “overwhelming domination” of the skies, he said.

The biggest risk facing Trump is not Russian air defence systems but killing Russians. The US administration warned Russia before last year’s attack on al-Shayrat and, presumably, would do so again. The US also knows the parts of the Syrian bases where the Russians are located.

But as Ben-Shalom said, things can go wrong in war. - Guardian News and Media