Aleppo: a cosmopolitan city built on thousands of years of trade 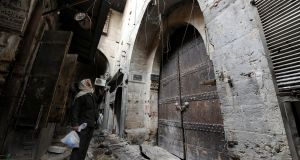 A man pictured at the Khan al-Jumruk entrance to the government controlled Old City of Aleppo, Syria on Saturday. Photograph: Reuters

What was so special about Aleppo, sitting on a bleak and dusty plain with no river, oasis, port or sheltering mountains, that led it to become Syria’s most populous city, a major urban centre continuously settled since the early bronze age?

The answer lies in its geopolitical location, the same reason it has been so fiercely contested in Syria’s ongoing brutal war. Whoever controls Aleppo controls the north of the country. The capital, Damascus, its historical rival, controls the south.

Situated midway between the Mediterranean port of biblical Antioch (modern Antakya in Turkey) and the Euphrates river, ancient Aleppo was built on trade and its citizens have always been merchants first and foremost. Their commercial skill was legendary, spawning proverbs such as “What was sold in the souks of Cairo in a month was sold in Aleppo in a day.”

The result was to produce a highly cosmopolitan city, multicultural, multi-ethnic and multi-religious, with a blend of Arabs, Kurds, Turks, Turkmen, Persians, Circassians, Jews, Armenians and Europeans. Many were refugees, of various Christian and Muslim denominations, fleeing persecution in their homelands. Aleppo absorbed them all, adding them to its rich and colourful tapestry.

As late as the 12th century, half of Aleppo’s population was Christian. The city’s masters at that time were Seljuks, a Turkic group who had entered from Iran, then become Sunni Muslims. Their architecture embodied this mix, but its sole remaining representative, the 1,000-year old minaret rising from Aleppo’s Great Mosque, was felled in crossfire in 2013.

It represented a unique synthesis of Persian, Arab and Turkic styles interwoven with classical pilasters and capitals, Islamic inscriptions and friezes.

In 2012, when the war reached Aleppo, the city’s population was more than 70 per cent Sunni Muslim, with 30 per cent Christian and other minorities. The demography may be about to change further, as it is doing all over Syria.

Much of Aleppo’s history may be read in its architecture. Crusader fragments such as the Cathedral of St Helena, converted to an Islamic theological school, still stand alongside the famous stone-vaulted Mamluk souks. This snake-like labyrinth of shops lent itself perfectly to rebel hideouts which were then shelled by government forces in September 2012, causing a massive fire that ended up leaving 40,000 traders bankrupt overnight.

It is one of the many ironies of the current war that since 2012 the citadel, historic protector of the city, has served as a military stronghold from which Assad government artillery has rained down on to its own cultural heritage, destroying its souks and historical monuments.