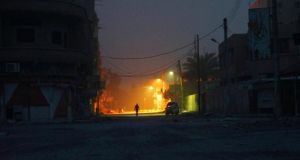 A man walks along a deserted street in the Syrian town of Deir al-Zor. Photograph: Khalil Ashawi/Reuters

The leader of al-Qaeda in Iraq has said the organistaion has merged with Syria's extremist Jabhat al-Nusra, which has sided with the rebels fighting president Bashar Assad's regime.

Abu Bakr al-Baghdadi, leader of the Islamic State of Iraq, says the two groups will rally under the same al-Qaeda flag. His announcement came in a 21-minute audio message posted on militant websites last night.

Sham is a name for Syria and the surrounding region.

The development is likely to raise concerns among foreign backers of Syria's opposition.

Experts have long said that al-Nusra Front was receiving support from al Qaeda-linked insurgents in neighbouring Iraq. The group has claimed responsibility for deadly bombings in Damascus and Aleppo, and its fighters have joined other rebel brigades in attacks on Dr Assad's forces.

At least 70,000 people have been killed since protests led by Syria's Sunni Muslim majority broke out two years ago against Dr Assad, who belongs to the minority Alawite sect, an offshoot of Shia Islam.

The demonstrations were met with bullets, sparking a Sunni backlash and a mostly Islamist armed insurgency increasingly led by the al-Nusra Front.

The US State Department in December designated the group a foreign terrorist organisation.