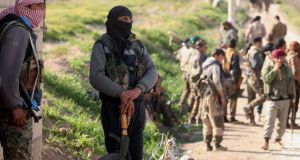 Air strikes targeted Islamic State’s last pocket in eastern Syria late on Tuesday as US-backed fighters pressed for a victory that would bring the jihadists’ self-proclaimed caliphate to its bloody end.

Dozens of trucks earlier headed towards Baghouz, a village on the banks of the Euphrates at the Iraqi border, where hundreds of Islamic State militants were making their last stand.

They were going to evacuate the remaining civilians, a source in the US-backed Syrian Democratic Forces (SDF) militia said, a crucial step towards taking control of the area.

However, by nightfall the trucks had not departed, and reporters there witnessed two air strikes against the jihadists.

Islamic State’s defeat in Baghouz would herald the final collapse of a project declared in 2014, when their leader, Abu Bakr al-Baghdadi, stood in a Mosul pulpit to declare himself caliph.

Nearly five years later that dream has been crushed by separate military campaigns in Iraq and Syria that, though backed by foreign powers, have been fought mainly by local, mostly Muslim, forces.

Though Islamic State fighters still hold out in a patch of desert in central Syria, and have staged guerrilla attacks in areas they have lost in both countries, their territorial state there is finished.

As in other places they have defended in the Middle East, the jihadists in Baghouz have sheltered among civilians to escape the worst of intense US-led air strikes that razed much of their former strongholds of Mosul and Raqqa.

The SDF, which has taken the quarter of Syria’s territory east of the Euphrates from Islamic State since 2015, has said isolating civilians there from the remaining jihadists is vital.

UN human rights chief Michelle Bachelet said earlier on Tuesday that some 200 families remained trapped, and called for their safe passage out.

General Joseph Vote, head of US Central Command, told reporters travelling with him in Syria on Monday that the SDF was moving cautiously.

“They’ve got a lot of civilians in there, they hold some Syrian Democratic Force prisoners, and they are using them as human shields,” he said of Islamic State.

The jihadists lost most of their territory in 2017 in both Iraq and Syria to separate military campaigns by the SDF and the Iraqi and Syrian governments.

However, Islamic State has carried out attacks in areas it controls, and numerous western and Middle East officials have said it still poses a threat.

It has stepped up guerrilla attacks against the SDF, the militia said on Tuesday, with sleeper cells moving “on a daily basis”, the militia’s spokesman said. – Reuters