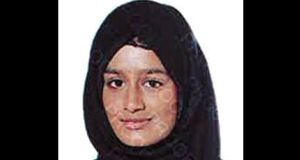 Islamic State schoolgirl Shamima Begum’s British citizenship is to be revoked by the UK Home Office, her family’s lawyer has said.

Lawmakers in the UK will seek an order “depriving” the 19-year-old Londoner of her citizenship, solicitor Tasnime Akunjee said.

Ms Begum fled her east London home in 2015 to travel to Syria to support the terror group, but wishes to return to the UK for the sake of her newly born child as the so-called caliphate crumbles.

In a statement, Mr Akunjee said her “family are very disappointed with the Home Office’s intention to have an order made depriving Shamima of her citizenship”.

“We are considering all legal avenues to challenge this decision,” he added.

ITV News reported a letter from the Home Office that was received by Ms Begum’s mother on Tuesday.

It said Home Secretary Sajid Javid had ordered the move and explained it had already been processed.

“Please find enclosed papers that relate to a decision taken by the Home Secretary, to deprive your daughter, Shamima Begum, of her British citizenship,” the letter read.

“In light of the circumstances of your daughter, the notice of the Home Secretary’s decision has been served of file today (19 February), and the order removing her British citizenship has subsequently been made.”

The letter asked the mother to let her daughter know of the decision and to inform her she has a right to appeal.