May returns to Brussels as UK prepares Brexit backstop plan 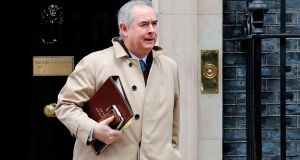 Theresa May will meet European Commission president Jean-Claude Juncker in Brussels on Wednesday as Britain prepares to outline the legally-binding changes to the Brexit deal it seeks to address MPs’ concerns about the Northern Ireland backstop.

The commission said on Tuesday that the EU wanted to help the British prime minister to win a majority at Westminster for the deal but ruled out renegotiating the legally binding withdrawal agreement.

“The EU 27 will not reopen the withdrawal agreement, we cannot accept a time limit to the backstop or a unilateral exit clause,” commission spokesman Margaritis Schinas said.

The prime minister told cabinet ministers on Tuesday that “alternative arrangements” for the Border could not replace the backstop, as Conservative backbenchers behind the so-called Malthouse compromise have argued.

After Monday’s meeting, a spokesman for the Brexit department said Mr Barclay discussed the “alternative arrangements”, which include technological and administrative measures to ease friction on the Border.

“While the commission engaged seriously with these proposals it expressed concerns about their viability to resolve the backstop. We agreed to keep exploring the use of alternative arrangements – especially how they might be developed to ensure the absence of a hard border in Northern Ireland on a permanent footing, avoiding the need for the backstop to ever enter force,” the spokesman said.

The EU expects Mr Cox to present draft legal text which he believes would enable him to change his legal advice to the government that Britain could be trapped within the backstop indefinitely. MPs are due to debate Brexit next week, when they are likely to get a chance to vote on an amendment that could compel the prime minister to seek an extension to the article 50 negotiating period by mid-March.

Moderate Conservatives fear that hardline Brexiteers in the European Research Group (ERG) are seeking to push Mrs May into leaving the EU without a deal. Former prime minister John Major on Tuesday night urged the “mainstream majority” of MPs to assert themselves against what he described as Brexit zealots who were manipulating the Conservatives.

“The decision parliament takes next week can undermine or revive the reputation of representative politics and from that flows so much of our whole way of life,” he said.

“Every so often, in our long history, there has come a moment when parliament has had to dig deep into its soul. Now is such a moment.”

Jeremy Corbyn on Tuesday expressed regret at the decision of seven MPs to leave Labour in protest against his leadership and his approach to Brexit and to anti-Semitism within the party. But he rejected their claim that he had failed to respond to concerns they expressed.

Shadow chancellor John McDonnell promised that Labour would undertake on “a mammoth, massive listening exercise” in response to the resignations.

“If it’s about the style of the leadership we’ll address that. If it’s about policy we’ll listen to that as well,” Mr McDonnell said.

Ruth George, a Labour MP close to the leadership, apologised on Tuesday after she suggested that the breakaway group might be secretly funded by Israel.

“I had no intention of invoking a conspiracy theory and I am deeply sorry that my ill-thought out and poorly worded comment did this. I withdraw it completely,” she said.