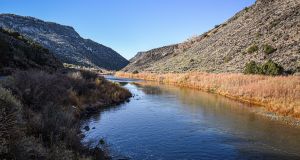 The corpses were found in an area that has seen violent territorial disputes between organised crime groups in recent years, near a town across the Rio Grande river from Texas. File photograph: Stephen Hiltner/The New York Times

Mexican authorities are attempting to identify 19 charred corpses which were found near a town across the Rio Grande from Texas, in an area that has seen violent territorial disputes between organised crime groups in recent years.

Authorities found the bodies late on Saturday in two burning vehicles which had been left beside a dirt road outside the town of Camargo. All the victims had been shot, but shells were not found at the site, leading investigators to believe they were killed somewhere else.

On Monday, relatives of a group of Guatemalan migrants said they feared that at least some of the bodies could belong to their loved ones. The Guatemalan foreign ministry said it was collecting DNA samples from a dozen relatives to see if there was a match with any of the bodies.

Mexico’s National Immigration Institute said the bodies were so badly burned they cannot immediately be identified.

Camargo has long been the scene of turf battles between rival drug gangs and authorities said three rifles were found in the pickup truck where the bodies were piled.

But if those suspicions are true, the killings would revive memories of the 2010 massacre of 72 migrants in the same state of Tamaulipas.

Ramiro Coronado told the Associated Press that he had a relative among a group of 13 migrants who left the Guatemalan province of San Marcos and were travelling together before contact with them was lost on Thursday.

Coronado said his nephew, Adán Coronado, 31, had left for the US along with other migrants in the San Marcos group about two weeks ago.

The group had kept in contact with family members back home, Coronado said, but there had been no word for them since Thursday, when they were apparently in or near Tamaulipas.

“It was the first time he had gone [to the US]. He said he wanted a better life situation for himself and his family,” Coronado said.

Mario Gálvez, a congressman who represents San Marcos, wrote in his social media accounts that the missing migrants included 10 men and three women.

“We have contacted the relatives, they say that the bodies found are those of their relatives, they have information that it was that group,” Gálvez wrote. “We have asked the Foreign Ministry to help the families with the repatriation of the bodies.”

“They cannot find development opportunities in their hometowns, which have historically been totally abandoned by the government,” Gálvez wrote. “The dream of our children and youths has become to reach the United States. ”

The 2010 massacre was one of the most notorious incidents in Mexico’s recent past.

Members of the Zetas cartel stopped two tractor-trailers carrying dozens of mostly Central American migrants and took them to a ranch in Tamaulipas town of San Fernando. After the migrants refused to work for the cartel, they were blindfolded, tied up and shot dead.

Camargo is a major smuggling transit point for drugs and migrants. Organized crime groups covet control of stretches of the border because they make money off everything that crosses the border.

Camargo is near the edge of territory historically controlled by factions of the Gulf cartel and in recent years a remnant of the Zetas known as the Northeast cartel has tried to take over. – Guardian