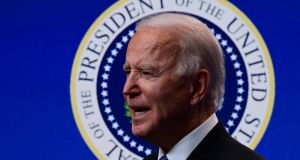 US president Joe Biden has signed an executive order which will see the federal government buy more goods made in the United States, as the new president seeks to boost America’s manufacturing industry.

The order requires government contracts to have a higher domestic component, while also tightening up rules around procurement.

“Today, we’re getting to work rebuilding the backbone of America: manufacturing, unions, and the middle class,” Mr Biden said in the White House. “It’s based on a simple premise: that we’ll reward work, not wealth, in this country.”

He said that federal government contracts to foreign companies went up by 30 per cent under the previous administration. “That is going to change under my watch.”

He also announced a new “Made in America” director role at the Office of Management and Budget.

“America can’t sit on the sidelines in the race for the future. Our competitors aren’t waiting,” Mr Biden said. Without referencing China, Mr Biden said that America should not be dependent on supplies from a country “that doesn’t share” US interests.

“We need to make our own protective equipment, essential products and supplies,” he said.

The announcement signals a move towards a more protectionist economic approach compared to previous Democratic administrations.

Mr Biden, who campaigned as a politician in synch with the needs and realities of the American worker and launched his presidential campaign in a union hall in Pittsburgh, has spoken about putting America’s workers first.

Earlier in the day, Mr Biden revoked his predecessor’s ban on transgender people serving in the US military. Mr Trump introduced the ban for new recruits three years ago, overturning an Obama administration initiative to allow transgender people to openly serve in the military.

“President Biden believes that gender identity should not be a bar to military service, and that America’s strength is found in its diversity,” the White House said in a statement.

Mr Biden also signed an executive order effectively continuing the travel ban on passengers from Europe and Brazil that was introduced by Mr Trump last March. Though Mr Trump signed an order in his final days instructing the restrictions to be lifted on January 26th, the Biden team immediately indicated that they would reverse the order.

Travel into the United States from the Schengen area and Britain and Ireland has been severely curtailed since March, with only American citizens, green card holders and some classes of visa holders permitted to enter.

However, Mr Biden has now added South Africa to the list of countries affected.

Meanwhile, House Democrats were expected to lodge the article of impeachment against Mr Trump with the Senate on Monday night, formally beginning the impeachment trial process. However, the trial itself will not begin until February 9th.

Senator Pat Leahy, a Democrat from Vermont, will preside over the Senate trial in his capacity as president pro tempore of the Senate. His appointment is another indication of the unique nature of Mr Trump’s impeachment trial as he becomes the first president in history to face possible conviction by the Senate after he has left office.

While the constitution states that the chief justice of the supreme court must preside over the trial of a president, it makes no reference to a former president.

Mr Leahy noted that previous presidents pro tempore had presided over impeachment trials of non-presidents and had “historically served as a neutral arbiter”.

“I consider holding the office of the president pro tempore and the responsibilities that come with it to be one of the highest honours and most serious responsibilities of my career. When I preside over the impeachment trial of former president Donald Trump, I will not waver from my constitutional and sworn obligations to administer the trial with fairness, in accordance with the constitution and the laws.”