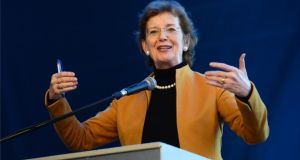 
Former president Mary Robinson is strongly tipped for the post of UN special envoy to Africa ’s troubled Great Lakes region, where her mandate would include helping implement a newly signed peace accord aimed at ending decades of conflict in eastern Congo.

“She is the front runner and is very likely to get the job, but it’s not a done deal yet,” a UN official told Reuters on condition of anonymity yesterday.

UN secretary general Ban Ki-moon is said to be keen to appoint Mrs Robinson to the job. She is currently visiting the Un ited States. Well-placed sources said Mr Ban and Mrs Robinson, who served as UN high commissioner for human rights between 1997 and 2002, had met to discuss the matter in recent days. It is understood Mr Ban will make an announcement on the new UN envoy within a week.

A spokesman for the Dublin-based Mary Robinson Foundation – Climate Justice, of which Mrs Robinson is president – declined to comment.

Last month Mr Ban said he planned to appoint a special envoy for the Great Lakes region to help governments in the area “reach agreements and establish mechanisms to guarantee non-interference in the internal affairs of the neighbouring states”.

The UN chief also proposed the formation of a new intervention force in eastern Congo following the signing of a UN-mediated peace deal between the Democratic Republic of Congo (DRC) and its neighbours, which involved a commitment not to interfere in the internal affairs of the mineral-rich Central African nation.

Mr Ban said the peace agreement offered an opportunity for signatory nations to collectively address the underlying roots of the conflict in eastern DRC and the surrounding Great Lakes region, “and to break the pattern of recurring cycles of violence”.

The current crisis ignited when the M23 rebel group launched attacks in eastern Congo last spring and eventually captured the city of Goma in November.

A UN expert panel has said that M23 was supported by Rwanda and Uganda, though the two countries have strongly denied it.