Despite efforts to procure vaccine, some nations will only vaccinate 20% of population 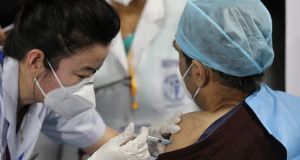 A beneficiary gets a dose of a Covid-19 vaccine shot, at the All India Institute Of Medical Sciences (AIIMS) in New Delhi. Photograph: Rajat Gupta/EPA

There are triumphant scenes as lorries leave a vaccine plant in Pune, India, loaded with boxes that will prevent thousands of deaths. Adar Poonawalla, the owner and chief executive of the Serum Institute of India, poses on the tailgate of a truck, making the most of his company’s “proud and historic” moment as the potential saviour of the nation – and even a large chunk of the world.

Poonawalla’s factory, the largest vaccine manufacturing complex in the world, is the best hope for immunisation for people in Africa and some low-income countries elsewhere – which could save them from the ravages of the coronavirus pandemic. The Serum Institute has been contracted to supply the UN-backed Covax initiative, which subsidises low-income countries, with 200 million doses of Covid-19 vaccines with an option on 900 million more.

For a heart-stopping moment last week, it seemed that vaccine nationalism within India might slam the door. On January 4th, just after the Serum Institute got approval from the Indian regulator for the vaccine – made under licence from AstraZeneca – Poonawalla was reported as saying there was a condition attached, which was that only India could have the vaccine for the time being.

The following day, he clarified the “confusion in the public domain” on Twitter, saying “exports of vaccines are permitted to all countries”.

But the lorries are headed across India for now and the episode underlines the tension as every country with cash wades into the fight for vaccines, putting manufacturers under unprecedented pressure to deliver for them.

As affluent Europe and North America scramble to deploy the Covid vaccines they have pre-bought – amid accusations that immunisation programmes are too slow and the wrong people are getting the jabs – there has been not a single shot in the arm in many countries elsewhere.

Three vaccines have been approved in the west. Pfizer/BioNTech and Moderna are expensive and need long-term storage at -70 degrees. Pfizer offered to sell the vaccine to South Africa at a 50 per cent discounted price of $10 a shot, but was told the cost was still prohibitive.

But Oxford/AstraZeneca’s vaccine is stable at fridge temperatures of 2-8 degrees and AstraZeneca has promised not to make a profit for the duration of the pandemic. It aims to provide 3 billion doses this year, made in factories around the world under licence. It is the mainstay of the Covax initiative, which has now bought a total of 1.97 billion doses of four different vaccines to distribute when they become available. The AstraZeneca vaccine accounts for most of it.

The Serum Institute has promised to make 100 million doses for Covax of the AstraZeneca vaccine and a further 100m of the Novavax jab – if and when that is approved. Covax has an option on a further 900 million doses of one or the other of those vaccines.

Deliveries could start as early as February, said a spokesperson for Gavi, the vaccine alliance which is a partner in Covax.

“We anticipate being able to provide each participating economy with the first tranche – enough to protect approximately 3 per cent of the population – in the first half of 2021. This process could begin as early as February, pending favourable regulatory outcomes and the readiness of health systems and national regulatory systems in individual participating economies.

“In terms of which vaccines will be rolled out to which countries, as well as timeframes, we hope to be able to share more on that very soon.”

Seven countries have now given emergency authorisation to the Oxford/AstraZeneca vaccine or the Serum Institute version: the UK, India, Argentina, the Dominican Republic, El Salvador, Mexico and Morocco. The Carlos Slim Foundation in Mexico is licensed by AstraZeneca to supply 150 million doses to Latin America. These countries could take delivery right away.

But other countries without a regulatory body will be waiting for the World Health Organisation to give the green light, which is said to need data from the Serum Institute. In what sounded like a nudge, the director general, Tedros Adhanom Ghebreyesus, said on January 11th it looked forward “to Serum Institute of India submitting full datasets for rapid assessment so WHO can determine whether we can recommend their AstraZeneca vaccine for international use”.

The AstraZeneca vaccine will also be manufactured by SKbioscience in Korea, BioKangtai in China, Siam BioScience and the local conglomerate SCG in Thailand and CSL Behring in Australia. The Fiocruz Institute in Brazil has signed a deal for 100 million doses of the Serum Institute vaccine, which it will put into vials in a process known as “fill and finish”.

In an attempt to queue-jump, the Brazilian president, Jair Bolsonaro, wrote to the Indian prime minister, Narendra Modi, on January 9th. “To enable the immediate implementation of our national immunisation programme, I would appreciate the supply to Brazil, with the possible urgency and without jeopardising the Indian vaccination programme, of 2 million doses,” Mr Bolsonaro wrote.

Brazil is also now buying 10 million doses of the Russian Sputnik vaccine. It is late to the party. At the very end of last year, Argentina took delivery of 300,000 doses and has been immunising healthcare workers. The Russians claim it is 92 per cent effective, but the data has not been published.

A few middle-income countries have started vaccination programmes using the Pfizer/BioNTech jab. Mexico took delivery of 3,000 doses in December. Chile and Costa Rica have also started using the vaccine. Mexican officials have been to talk to their counterparts in Argentina about buying Sputnik.

Chinese vaccines are also beginning to be used. Bahrain and the United Arab Emirates both gave emergency approval to the vaccine made by Sinopharm in December, which the manufacturers say is 86 per cent efficacious, although – as with the Russian vaccine – the full data has not been made public. Turkey has bought the Chinese vaccine, and Morocco, Egypt and Nigeria have all been in discussions.

There are other promising jabs on the way. Novavax aims to make 2 billion doses for global use – but has not yet finished its trials. Covax has an option on 500 million doses of the Janssen vaccine, which has the advantage of being one shot, but although results from phase 3 trials are expected within weeks, there are said to be manufacturing delays. It could be a major player, however.

“Johnson & Johnson aims to provide global access to Janssen’s Covid-19 vaccine candidate, if proven to be safe and effective. We have committed to producing 1 billion vaccines doses a year starting in 2021 and have expedited manufacturing scale-up to reach this goal,” said a spokesperson. “We are leveraging a global supply base for our vaccine candidate, including facilities in the United States, Europe, Asia and Africa.”

David Salisbury, associate fellow of Chatham House’s global health programme and director of immunisation at the UK department of health until 2013, said that even if the amount of vaccine distributed across the world increased, not all countries would be able to run vaccination programmes for everyone who needed it.

“There’s a huge gap between a desire to have vaccine and political statements that your country will have vaccine – and actually having contracts either in place yourself or on your behalf and the ability to pay for it – and much more, the ability to implement it,” he said.

The vaccination against Covid-19 is not like running childhood vaccination programmes, but more similar to the effort to immunise against the seasonal flu. Most low-income countries do not have enough clinics or databases to tell them how to access those at risk.

Countries that get enough vaccine for 20 per cent of the population, which is what Covax hopes to provide eventually, will not be able to stop transmission. They will be in an “endless cycle”, said Mr Salisbury vaccinating health workers and those most at risk of dying, with more people getting older and moving into the at-risk groups all the time.

The coronavirus is not going away, especially in low income countries. It could be argued the vaccines are just a temporary fix.

“Predicting the future for vaccine campaigns in all parts of the world is something many of us are already thinking about. Will this become institutionalised as an annual vaccination programme for industrialised countries? Unless this virus goes away I think the answer is yes,” said Mr Salisbury. “But what will the appetite be in low-income countries for resources that are already under huge pressure to be used for prevention of coronavirus?” –Guardian