Covid-19: Nursing homes to be prioritised for vaccination for 10 days amid supply shortage

Staff at Nenagh hospital have posted a video to social media calling on the Government to sanction Covid-19 vaccines for the hospital's frontline staff. 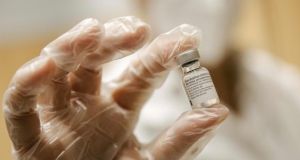 Senior managers in Dublin hospitals have been told that they will not receive any further first vaccine doses ‘for the coming week or two at least’. Photograph: Vladimir Zivojinovic/AFP via Getty Images

The vaccination of healthcare workers against coronavirus is to be scaled down for at least 10 days in order to allow for greater focus on nursing homes and other care facilities.

It comes amid a temporary supply shortage that officials said will see shipment volumes of Pfizer-BioNTech’s vaccine drop by between 20 and 50 per cent, but only for a week.

Senior managers in Dublin hospitals have been told that they will not receive any further first vaccine doses “for the coming week or two at least”. The decision is likely to cause concern among hospitals where only some staff, or none at all, have been vaccinated. They include Nenagh Hospital in Co Tipperary, where frontline staff yesterday appeared in an online video pleading for access to vaccines. Taoiseach Micheál Martin later told Virgin Media News that vaccines will be on their way to Nenagh but not at the level people may want.

During this period rollout is being prioritised in residential care services, along with the administration of second doses to healthcare workers who were vaccinated in late December.

It comes as Pfizer-BioNTech said on Friday night that deliveries to the European Union would be limited until January 25th by works to increase capacity in its Belgian factory, before returning to a normal delivery schedule.

The reduction in supply will be compensated for by higher volumes from mid-February. Official and political sources said the supply issue would have a temporary impact on the vaccine rollout in late January.

Among the strategies under consideration to mitigate the hit is to limit the number of people receiving their first shots in order to ensure there would be supplies for those due to receive their second jab.

However, the impact of the Pfizer decision was not as bad as first feared, with political sources indicating on Friday that initial estimates had been that the volume of deliveries could drop by up to half for the rest of the first quarter of the year.

Prof Brian MacCraith, the chair of the State’s vaccine task force, said last night that most of those immunised over the next 10 days will be residents and staff of long-term care facilities.

He said Minister for Health Stephen Donnelly had asked for vaccinations in these facilities to be accelerated due to the massive transmission of infections at present and because this group were accorded first priority in the Government’s plan. Ten times as many healthcare workers have been immunised since late December compared to nursing home residents, as it was decided hospitals were a better place to start the programme.

Mass vaccination of GPs is to begin this weekend at three sites in Dublin, Galway and Portlaoise. However, pharmacists have not yet been told when they are to be immunised, despite a HSE briefing document sent to opposition health spokespeople outlining that chemists will be involved in the vaccine rollout.

The document outlines that GPs will play a “key role” in the delivery of the vaccines, while stating only that “pharmacists will also be involved as part of this overall programme”. The Irish Pharmacy Union told members work has commenced on a programme of vaccination for pharmacists. However, there is no start date, with chemists told not to use an online portal created for registration for the jab.

The update also reveals that “private vaccinator contractors” may be drafted in to bolster the number of vaccinators available, alongside dentists, ambulance workers, private hospitals and former healthcare workers.

Fifty coronavirus-related deaths were reported by the the National Public Health Emergency Team last night along with 3,498 new cases. Chief medical officer Dr Tony Holohan urged anyone arriving into the State from Brazil to arrange for a coronavirus test due to a new variant, which has not been identified in the State yet.