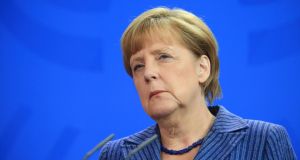 One hundred years after a Bosnian nationalist fired the shots that led to the outbreak of the first World War, EU leaders gather in the Flemish town of Ypres today for the start of a two-day summit that will be dominated by fractious political debate on the leadership of the European Union.

Taoiseach Enda Kenny will join other EU leaders for a ceremony and dinner in the pretty Belgian town that saw some of the bloodiest conflict of the war, amid growing expectation former Luxembourg prime minister Jean-Claude Juncker will be named next European Commission president, despite strong opposition from Britain.

Leaders will also sign trade and political agreements with Ukraine, Georgia and Moldova, whose leaders are expected to attend. These risk irking Russia, which is opposed to further ties between former Soviet republics and the EU.

“These signatures will be a solemn commitment to accompany Georgia, Republic of Moldova and Ukraine each step of the way along the road of transforming their countries into stable and prosperous democracies,” European Commission president José Manuel Barroso said, as Nato warned that Russia was failing to honour its international commitments.

But while Ukraine is high on the agenda at the two-day summit, the nomination of the European Commission president is likely to dominate, with Britain expected to put the appointment to a vote tomorrow.

German chancellor Angela Merkel insisted yesterday she wants Jean-Claude Juncker as the next commission president, adding that it would be “no big deal” if this was agreed by qualified majority rather than unanimously, as in the past.

German officials have indicated that they were unimpressed by London’s megaphone diplomacy against Mr Juncker’s EU ambitions, but promised to work for a deal. They “took note” of London’s wish for a vote on Mr Juncker’s candidacy, saying they were sure it could be organised.

“We always try to find ways acceptable to all. But in the end every government head will have to make his decision how he will decide to vote.” said a senior German official. “We assume a large majority will be found at dinner for Mr Juncker.”

She told the Bundestag yesterday she had little time for the renewed debate in Europe, particularly in France, about loosening the terms of the EU Stability and Growth Pact. Instead she said a balance must be struck between the pact’s red lines and its “excellent conditions” for growth and job creation.

“We must use both just as they have been used in the past,” said Dr Merkel.

“The growth pact allows the necessary flexibility to allow growth- friendly budgetary consolidation and it makes clear that stable growth can only be reached through sustainable structural reforms.”