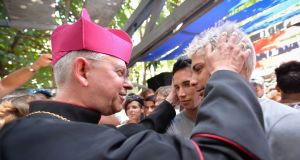 A couple performs a symbolic marriage with US Reverend Roger LaRade, during a gay parade in Havana. Photograph: Adalberto Roque/AFP

The commission in charge of writing communist-run Cuba’s new constitution has revised an original draft to remove the concept of marriage altogether after originally amending it to open the doorway to same-sex unions.

The first draft of the new constitution, that was unveiled in July, included Article 68 redefining matrimony as gender neutral rather than between a man and a woman, a project promoted by the daughter of Communist Party head Raul Castro.

Controversy over that amendment in the macho country dominated a nationwide, three-month public consultation on the new constitution designed to update a Soviet-era one.

The most vocal critics of Article 68, the evangelical churches, threatened to shoot down the entire constitutional revamp over that single issue in the referendum on the final version scheduled for early next year.

The commission told the National Assembly on Tuesday the issue of matrimony should be addressed instead in the family code that is set to be updated shortly after the new constitution has been approved.

The National Assembly is set to vote this week on the final version. Then it heads to the popular referendum.

“The commission proposes . . . removing the concept of matrimony from the project of the constitution as a way to respect all opinions,” the assembly wrote on its Twitter account. “Matrimony is a social and legal institution.”

Cuba has made great strides over the past decade on lesbian, gay, bisexual and transgender rights and many younger, urban Cubans and LGBT activists welcomed Article 68.

A majority of Cubans nonetheless appeared to reject it and evangelical churches mobilised the discontent in an unusually strong non-governmental political campaign for Cuba, gathering signatures to petition against it and holding services in protest.

From August to November, nearly 9 million of Cuba’s 11.2 million citizens attended more than 130,000 community-level meetings nationwide to give their feedback on the constitutional draft, state-run outlet Cubadebate wrote on Tuesday.

The government has called the process participatory democracy at its best while opponents have branded it a fraud given that the fundamentals of Cuba’s one-party socialist system were never up for debate.

Article 68 proved to be the most polemic, with the majority of those expressing their opinion on it rejecting the amendment, Cubadebate wrote.

The revised draft keeps the amendments limiting presidents to only two consecutive terms and requiring them to be no older than 60 at the start of their first term, according to Cubadebate.

The commission, headed by Mr Castro, made a total of 760 changes to the draft constitution, from tweaking a single word to incorporating a full new article, the outlet wrote. The final version has 219 articles, five more than the original one. – Reuters