Oregon politician pleads: ‘She is not a terrorist. She is a four-month-old baby girl’

A four-month-old Iranian baby in need of emergency heart surgery has received a waiver to enter the US. Earlier on Friday U.S. Congresswoman Suzanne Bonamici, a Democrat from Oregon, criticised the ban on the U.S. House of Representatives. 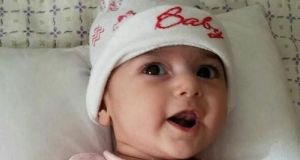 A four-month-old Iranian girl in need of an emergency heart surgery in Oregon has been prevented from entering the US because of Donald Trump’s 90-day travel ban on Iranian citizens, the girl’s uncle and her family’s attorney say.

Fatemah Taghizadeh was diagnosed with twisted arteries not long after her birth, said her family’s attorney, Amber Murray.

Murray said that she and another lawyer were filing paperwork Friday to apply for an exception to the ban and a visa.

They were also in talks with doctors around the US to plan for surgery for Fatemah, because one of the conditions of humanitarian parole, a special visa status, is to have medical treatment scheduled and funded in advance. The attorneys, working pro bono, have planned a fundraising campaign for the family.

“We’ve never had to apply for an exemption to a travel ban before, so the first thing we needed help with was who do we have to contact, what do we have to do, facilitating access with doctors - they’ve helped a lot with that.”

Fatemah’s uncle and her grandparents are all US citizens living in Oregon, so the family decided to travel to the US for an emergency surgical consultation at the Oregon Health & Science University (OHSU) - hopefully followed by surgery .

Fatemah’s family spent weeks preparing paperwork for tourist visas for medical purposes, and travelled to Dubai to interview for the visa at the US embassy in late January.

“For getting the visa, they ask for a lot of the paperwork,” Sam Taghizadeh, Fatemah’s uncle, told

“You have to do many things, you know. For three weeks we [were] working for every single thing they wanted.”

“It’s like a nightmare,” Taghizadeh said. “All the paper, everything was ready, and just in the last minute they cancelled everything.”

Taghizadeh told the Oregonian that the family was told to re-apply for a visa in three months. He did not immediately respond to a request for an interview.

“You know, in one night everything changes,” he said, adding, “I was in shock.”

In a statement, Fariborz Jahansoozan, an official with the Washington interests section of Iran, called the case “a grave heartbreaking story” that officials were not previously aware of.

The spokesman said that the tens of thousands of visas cancelled or denied under the order could amount to “humanitarian calamities under the cloak of national security”.

Saying that the interest section “has no control over what is being done”, he added: “Wouldn’t you agree that there could be many other ways to approach it without any unwarranted process that could perhaps create another catastrophe?”

On Friday, representative Suzanne Bonamici took Fatemah’s case to the floor of the House of Representatives, and condemned Trump’s order as she gestured at a photo of the infant.

“This is Fatemeh. She is not a terrorist. She’s a four-month-old baby girl who is in immediate need of open-heart surgery,” Bonamici said.

“Her parents desperately want the best care for her, so they planned to bring her from their home in Iran to Portland, Oregon, to one of the best hospitals for paediatric heart surgery.”

Bonamici said that she has offered help to the Taghizadehs and that she hopes federal courts “invalidate this unconstitutional executive order soon, and I hope it’s in time for baby Fatemeh”.

The senators are also drafting a letter in support of an exception status for the Taghizadehs.

Murray said it was possible that the Taghizadehs might roll their complaints into the larger lawsuits against Trump’s order, which have caused temporary stays on deportations around the country.

“I wouldn’t rule it out but we haven’t really talked about it yet,” she said. “It’s been a little bit like triage the last few days.”

Fatemah and her parents have returned to Tehran since being blocked by the travel ban, Murray said. The infant’s uncle said that he and his parents had been shaken by Trump’s order.

“Why we came to US - we came here for freedom. For a better life. I’m feeling nowhere is safe,” he said.

“My father was so excited to see his granddaughter for the first time,” he added. “Our whole family is in a depression.”