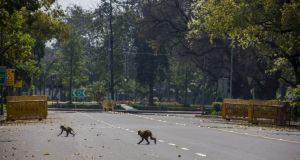 India is locking down large swaths of the country until at least the end of the month, as it seeks to control the spread of the deadly coronavirus following a surge in cases over the past two days.

The curbs will prohibit all but essential services from operating and will take effect from Monday morning. All inter-city and long-distance trains – which normally carry 23 million people a day – have also been suspended, as have the local trains in Mumbai and Kolkata. The Delhi Metro and other public transportation networks are also being halted.

The restrictions and closures – which will vary slightly from state to state but affect most major cities – were announced on Sunday evening, as the number of cases in India surged to more than 350, with seven deaths.

India was already in a de facto shutdown on Sunday, as the country of 1.37 billion people observed a voluntary one-day “people’s curfew” at the request of prime minister Narendra Modi, who appealed for them to stay home for “just one day” on Sunday.

Many had speculated that the one-day curfew – which Mr Modi announced on Thursday – was intended to prepare people psychologically for longer, stricter measures, which will be now be actively enforced by law enforcement agencies.

“India is moving much more rapidly than it was before,” said global health researcher Anant Bhan, speaking from Gurgaon. “We will have to see if this makes a major impact.”

Mr Bhan said the next week was critical for India to assess the severity of the crisis by ramping up testing and readying hospitals for a surge in patients. “There is a possibility of a sudden flood in cases,” he said. “As it is, India is stretched to capacity and existing ventilators are occupied.”

India’s health authorities maintain that the country is still in stage two of the outbreak with all confirmed cases either imported by travellers or transmitted by returned passengers to direct contacts such as family, friends and colleagues.

But the emergence of at least three Indian coronavirus patients with no known link to travellers has fanned fears that the country has entered stage three – community transmission – where the virus is circulating freely.

The discovery of 12 confirmed cases in Bhilwara, a town in the state of Rajasthan with a population of about 400,000, has underlined how the pathogen has spread to the country’s vast hinterland, where weak medical infrastructure could quickly be overwhelmed by a crisis.

Experts fear that India has underestimated the rate of infection by limiting diagnostic testing. The world’s second-largest country has tested fewer than 20,000 people as of Sunday, far below the 160,000 that Germany is testing weekly. South Korea, which is conducting 15,000 tests daily, has been held up as an example of a country that has managed to get the outbreak under control.

Over the weekend, authorities widened coronavirus testing criteria from travellers with symptoms to all hospitalised patients with acute respiratory infections, along with direct contacts of confirmed patients, a measure that will dramatically increase the pool of tests.

“Finally [Indian Council of Medical Research] has woken up to expanding testing. But it continues to sing the same song of no community transmission defying all logic or reason when in one day we have clocked 100 cases. We need to prepare for the worst.”

After a day of eerie silence across India’s usually bustling cities as a result of the shutdown, at 5pm Indians took to their yards, balconies and roof tops to bang pots and pans, blow horns and sing the national anthem in a show of support for people working to end the outbreak. – Copyright The Financial Times Limited 2020