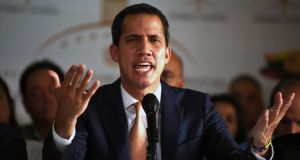 Venezuela’s opposition has vowed to defy a crackdown launched by the regime of president Nicolás Maduro in reprisal for last week’s failed uprising against the populist leader.

Agents from the state intelligence service detained the vice-president of the opposition-controlled National Assembly, Édgar Zambrano, on Wednesday night for his role in the uprising. He was stopped in the capital Caracas in his car, which was then towed to a former shopping centre that is now used to house political prisoners.

Mr Zambrano was just one of 10 opposition figures facing arrest after the supreme court, which is dominated by Mr Maduro’s chavista movement, stripped them of their parliamentary immunity following last week’s events. Richard Blanco, another of the group targeted, sought refuge in the Argentinian embassy on Thursday.

He declared himself president in January in a bid to step up pressure on Mr Maduro and has since been recognised by more than 60 countries as Venezuela’s legitimate head of state.

Mr Guaidó took to Twitter to say the “kidnapping” of Mr Zambrano would fail to halt his campaign to force Mr Maduro from power. Mr Zambrano’s arrest was also widely condemned by the international community. The International Contact Group on Venezuela, made up of the European Union and moderate regional states urged his “immediate and unconditional release”.

But Venezuela’s foreign minister, Jorge Arreaza, said on Twitter that foreign governments taking the side of those he described as “coup-mongers” made themselves accomplices in what he described as the “unconstitutional military uprising” of last week.

Despite statements that it seeks to engage the opposition in dialogue, the Maduro regime has increased pressure on the National Assembly in recent weeks. According to the legislature’s political committee, 67 of the 112 opposition deputies have been subjected to political persecution, including detention and exile. The United Nations has classified the detention and subsequent disappearance of opposition deputy Gilber Caro as constituting “an enforced disappearance under international law”.

The National Assembly is the last institution to enjoy democratic legitimacy in Venezuela. In a 2015 election that was widely recognised as free if not fair, the opposition alliance handed Mr Maduro’s United Socialist Party its worst ever defeat, winning two-thirds of the assembly’s seats.

Chavismo responded to this loss by holding an election for a new constitutional assembly with powers superseding the National Assembly.

The opposition boycotted what it said was a rigged vote designed to undermine the legislature and most regional organisations and the European Union refused to recognise the new body.

Then last year Mr Maduro won re-election in a presidential poll that was again boycotted by the main opposition groups. Before the vote the UN High Commissioner for Human Rights, Zeid Ra’ad al-Hussein, said extrajudicial killings by Venezuelan security forces meant the country failed to meet the “minimal conditions for free and credible elections”.

Mr Maduro has presided over the collapse of Venezuela’s economy, which has halved in size since he assumed office in 2013, causing widespread hunger and frequently leaving swathes of the country without electricity and running water.

Diseases such as malaria that had been eradicated are once again rampant following the implosion of the country’s public health system and the United Nations estimates 3.7 million people have fled abroad as a result of the crisis.