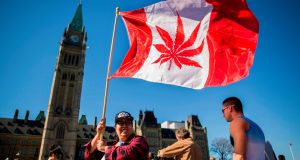 Canada’s upper house of parliament on Tuesday approved a revised Bill to legalise recreational marijuana, setting the stage for the country to become the first Group of Seven nation to legalise cannabis.

The Senate voted 52-29 in favour of the revised bill from the elected House of Commons, paving the way for a fully legal cannabis market within eight to 12 weeks.

Prime minister Justin Trudeau’s Liberals had made legalising recreational use of marijuana part of their successful 2015 election campaign, arguing the new law would keep pot out of the hands of underage users and reduce related crime.

“It’s been too easy for our kids to get marijuana - and for criminals to reap the profits. Today, we change that. Our plan to legalize & regulate marijuana just passed the Senate,” Mr Trudeau said in a tweet.

As the first major economy to fully legalise cannabis, Canada’s regulatory rollout will be closely watched by other nations considering the same path - and by global investors, who have already poured billions into Canadian marijuana firms.

Legalisation has already been delayed from the government’s initially planned July launch.

While production of cannabis is regulated by the federal government, provinces and cities have more powers over retail sales either through private or government-owned stores.

“I’m feeling just great,” CBC News quoted Tony Dean, who sponsored the Bill in the Senate, as saying. “The end of 90 years of prohibition. Transformative social policy, I think. A brave move on the part of the government.”–Reuters