Irish behind new campaign against FGM in Somalia

Published May 2014 | Ifrah Ahmed, an activist and survivor of female genital mutilation, hopes to bring her anti-FGM campaign to Somalia, her home country. Here she shares her personal story of FGM. Video: Kathleen Harris 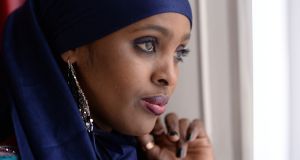 A campaign against female genital mutilation (FGM) in Somalia involving Irish people is hopeful of winning a strong endorsement this weekend from religious leaders in Mogadishu.

As organisers were putting the final touches to the campaign, its urgency was underlined by reports emerging this week that a 10-year-old Somali girl bled to death as a result of her FGM going “wrong”.

The girl has been named as Deeqa Dahir Nuur. She was brought to a “traditional cutter” in Olol village in Galmudug state.

According to activist Hawa Aden Mohamed, reported in the Guardian, one of Deeqa’s veins was severed while mutilation was being carried out and, despite being taken to hospital, the bleeding was not controlled and she died.

Campaign organisers say they will use Deeqa’s tragedy to bring home forcefully why FGM should not be tolerated.

The Irish influence behind the new campaign, which starts on Sunday at an event in the Somalia the organisers are calling The Gathering, is strong.

The Gathering will include over 100 Somali notables including Zeinab Abdi, wife of the Somali president, Mohamed Abdullahi Farmaajo; the country’s deputy health minister Mohammed Said Abdillah. Perhaps most significantly, in terms of the campaign aims, a group of significant Somali imams (Islamic religious leaders) will also be present.

Also there will be Ireland’s ambassador to Kenya, Vincent O’Neill, who also represents Ireland in Somalia and whose embassy is strongly supportive of the campaign, and Ifrah Ahmed, the Somali-born Irish woman advising the Somali government on FGM and whose Dublin-based foundation campaigns against the practice world-wide.

She and Irish film-maker Mary McGuckian are putting the finishing touches to A Girl From Mogadishu, which will be released in September.

Other Irish interests behind the campaign include Dr John Climax and his Human Dignity Foundation, and journalist Maggie O’Kane, chief executive of the London-based organisation Global Media Campaign to End FGM.

Sunday’s gathering will be followed by a week-long campaign against FGM.

“The aim,” says O’Kane, “is to create a media-focused movement for religious leaders to speak out against FGM. The key thing is to get the message out on [Somali] national TV.

“In a country where FGM if highly prevalent, this will be the first time when religious leaders are calling for zero tolerance to FGM.”

While the stance of religious leaders against FGM is seen as critical, the practice predates both Islam and Christianity and is rooted more in male efforts to control fertility and female sexuality, rather than any faith-based observances.

Archaeological evidence for the practice of FGM existed in Pharaonic Egypt (up to 3,000 years before Christ) and in Babylonian times (2,000 years BC).

The practice is inflicted typically on children aged between about five years and the early teenage years. It is often carried out in bush conditions using razor blades or crude knives.

FGM performed under clinical medical conditions can actually be worse, according to O’Kane, because the child is sedated and is therefore unresisting, and the cutting can be deeper and more extreme.

There are four main types of FGM, each aiming to control, in varying degrees, female sexual activity and access to the vagina.

The third is the removal of the clitoris and the labia, or vaginal lips. The fourth and most extreme form of mutilation, involves all three plus the sewing closed by the vagina, save for a tiny passage allowing for urination.

The United Nations regards FGM as a form of violence against women. Despite that, it is practised widely in east and west Africa and in Saharan Africa. Some 98 per cent Somalia’s female population, between the ages of 15 and 49, have undergone FGM.

“In Somalia, there is a strong belief there is a religious obligation to cut your daughter,” says O’Kane.

“One in 10 women in the border area with Kenya die in childbirth. The reason this happens is that their cervix is badly damaged during mutilation. The cervix needs to stretch during childbirth so the baby can get out.”

Every six seconds somewhere in the world, FGM is performed on a child, “but for some reason, maybe it’s because it involves women in impoverished parts of the world, no one’s really talking about,” says O’Kane.

Critical to the campaign in Somalia is getting religious leaders and doctors talking against FGM in unison.

Ifrah Ahmed, who came to Ireland in 2006 as an asylum-seeker, survived FGM. Since her appointment in March 2016 as an advisor on gender issues to the Somali government, what she has done is, in O’Kane’s words, “extraordinary in terms of a single person - the scale of what she’s doing in east Africa is amazing”.