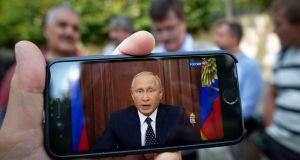 Vladimir Putin has urged his people to reconcile themselves to painful state pension reforms, warning that a delay to the plans to hike the retirement age would place an intolerable burden on the Russian economy.

“Any other approach would be irresponsible and dishonest,” the Russian president said in a televised address to the nation on Wednesday.

It had been widely expected that Mr Putin would eventually intervene to calm the political storm that erupted when Dmitri Medvedev, the Russian prime minister, submitted a Bill to parliament in June raising the retirement age from 60 to 65 for men and from 55 to 63 for women.

Opinion polls indicate that the overwhelming majority of Russians oppose the measures, which have contributed to a dip in Mr Putin’s approval ratings.

Speaking in a concerned, avuncular fashion, Mr Putin devoted a full 20 minutes to defending the case for pension reform on television on Wednesday, while offering some concessions.

He also stated that women should be allowed to retire at 60 rather than at 63 as stipulated in the Bill, to reflect Russia’s “especially tender” attitude to its womenfolk, who played an important role not just in the workplace but as carers at home.

Mr Putin has taken advice from liberal market economists in his circle, including former Russian minister for finance Alexei Kudrin, who has long advocated pension reforms. However, the pension debate is fraught with risk for the president, who pledged back in 2005 to refuse any increase in the retirement age as long as he was in charge in the Kremlin.

Admitting that he had changed his position, Mr Putin explained that a sharp drop in the birth rate during Russia’s chaotic transition to capitalism in the 1990s coupled with a rise in life expectancy had tipped the balance of the pension system, leaving too few workers to support the elderly.

Minutes after Mr Putin closed his address, Valentina Matviyenko, the speaker of the Federation Council, the upper house of the Russian parliament, endorsed the president’s proposals as “fair and justifiable”. Senators were ready to vote the amendments into law, she added.

However, Valery Rashkin, a Communist Party deputy in the Duma, pledged to continue the battle against pension reform and lead protests on the streets in the coming days. “This address changes nothing in our position on the pension age,” he told Echo Moskvy radio. “The mask has simply been thrown off . . . It is one line of command. Putin, Medvedev and United Russia [the Kremlin’s political party] that introduced this cannibal legal project.”

Kremlin critics on social media let rip with a stream of feisty commentary about Mr Putin’s address. The Russian president had been deployed like “heavy artillery” in the hope that his authority would reconcile people to pension reform, tweeted Lyudmila Dyakova. “But the opposite has happened, they have destroyed the authority of the leader.”