Explainer: Has Michael Atiyah conquered the Everest of mathematics? 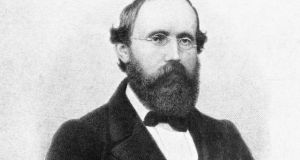 An undated portrait of German mathematician Bernhard Riemann (1826-1866). Riemann established the foundations of modern differential geometry and, in 1859, formulated the hypothesis that bears his name. Photograph: Bettmann/Getty Images

A major mathematical result has been announced by British-Lebanese mathematician Sir Michael Atiyah. In a talk at the 6th Heidelberg Laureate Forum in Germany on Monday Atiyah outlined what he described as “a simple proof using a radically new approach” of the Riemann hypothesis – the most celebrated problem in modern mathematics.

The proof (or refutation) may come tomorrow, or we may have to wait for a century or more. The Riemann hypothesis is the Everest of mathematics.

When asked which mathematicians he most admired, Atiyah named Bernhard Riemann and Irishman William Rowan Hamilton. Riemann established the foundations of modern differential geometry and, in 1859, formulated the hypothesis that bears his name.

His work had a profound influence on the mathematics of the 20th century. He was very far in advance of his times, a deep and innovative mathematician. Riemannian geometry was the framework for Einstein’s theory of general relativity.

Hamilton formulated what we call Hamiltonian mechanics, and invented quaternions. All the numbers we are familiar with, the “real numbers”, can be arranged as points on a line. But we can also consider points in a plane; these give a richer set of numbers, the complex numbers. Each point in the plane has co-ordinates (a, b) and it was Hamilton who first gave the rules for multiplying pairs of numbers. This led him on to the more complicated quaternions; numbers in four-dimensional space.

It is obvious that x - 4 is zero when x = 4. We say that the function f (x) = x - 4 has a zero at x = 4. You may recall solving quadratic equations at school: these have two zeros. The Riemann zeta function is much trickier, and has an infinity of zeros. This function, defined by Riemann, takes a value for each point in the complex plane. Some of these values are zero: the negative even numbers, -2, -4, and so on all yield zero. Riemann believed the remaining zeros are on a vertical line, the critical line, in the complex plane. This is the Riemann hypothesis which, despite strenuous efforts, has never been proven.

The RH can be formulated in diverse and seemingly unrelated ways, some of which look deceptively simple: many statements equivalent to RH involve only real numbers. The hypothesis is inextricably intertwined with the distribution of prime numbers (primes cannot be expressed as products of smaller numbers), and the proof would have major consequences in number theory.

Michael Berry of Bristol University encapsulates the hypothesis in the phrase “the primes have music in them”.

Who is Michael Atiyah?

Born in London in 1929, Atiyah was awarded a doctorate at Trinity College, Cambridge in 1955 for a thesis entitled Some Applications of Topological Methods in Algebraic Geometry. One of the leading mathematicians of the 20th century and still at the coal-face, Atiyah has spent most of his academic life in the Universities of Oxford and Cambridge, and at the Institute for Advanced Study in Princeton. He was awarded the Fields Medal in 1966 and the Abel Prize in 2004. Both of these awards are considered comparable to a Nobel Prize.

The proof presented by Atiyah depends on a new function called the Todd function, and is underpinned by ideas introduced by John von Neumann, a giant among 20th century mathematics. In his analytical theory, von Neumann introduced “the infinite iteration of exponentials”.

The Todd function is related to the fine structure constant of fundamental physics, and Atiyah said that he “stumbled upon the proof” of RH while studying the fine structure constant. The proof is by contradiction: Atiyah assumes a zero off the critical line and shows that this leads to an impossible result. Therefore, the hypothesis must be true and the theorem is proved!

Proof of RH has been outstanding for 160 years. Many reputable mathematicians have attempted and failed to prove it. Atiyah’s result, if right, would be a dramatic breakthrough. There is very little chance that he is correct: major proofs normally require large advances in understanding, while Atiyah has claimed a “simple proof”.

His outline may lead to a complete proof or, more likely, may amount to nothing. In recent years, Atiyah has claimed to have proved other remarkable results but has failed to convince his peers. It seems incredible that Atiyah is right, but we will have to await the judgment of experts before we learn if he will collect the $1 million Millennium Prize.