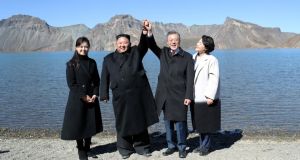 North Korean leader Kim Jong-un and South Korean president Moon Jae-in visited the sacred Mount Paektu on the last day of a three-day summit following a series of agreements both Koreas hailed as a major breakthrough towards peace.

The visit to Mount Paektu, an active volcano on the North Korean-Chinese border revered by both Koreas, is hugely symbolic. In Korean mythology, the mountain is the birthplace of Dangun, founder of the country’s first kingdom Gojoseon. North Korea claims Kim’s father Kim Jong-il was born there, even though he was more likely born in the Soviet Union.

While the imagery of the summit was overwhelmingly positive and charged with emotional rhetoric about thousands of years of Korean unity, the real test will be if the US and North Korea can agree on how to achieve unilateral nuclear disarmament on the Korean Peninsula.

Kim said his country would permanently dismantle its main nuclear complex in front of international inspectors, but in return he required similar, unspecified concessions from the US, most probably agreement to ease sanctions.

The two Koreas agreed to boost co-operation and Kim even raised the prospect of becoming the first North Korean leader to visit the South’s capital Seoul. Both Koreas would launch a joint bid to host the Summer Olympics in 2032.

The joint communiqué marks a significant advance following weeks of inaction on denuclearising the Korean Peninsula. Moon said after the summit on Thursday that the North Korean leader wants a second summit with US president Donald Trump soon to hasten denuclearisation.

Initial indications from Washington were positive. Trump welcomed developments from the inter-Korean summit as “good news” and “tremendous progress”, while secretary of state Mike Pompeo said Washington was ready to resume talks towards achieving denuclearisation of the peninsula “by January 2021”.

Kim’s statement on the agreement was typically high on emotion but low on detail. “The road to our future will not always be smooth and we may face challenges and trials we can’t anticipate. But we aren’t afraid of headwinds because our strength will grow as we overcome each trial based on the strength of our nation,” he said.

Moon, who is keen for progress on the North Korean peace process to help revive support at home, struck an equally emotional tone in a speech at the North’s mass games.

“I now propose that we completely eliminate the hostility of the past 70 years and take a big step forward in peace so that we can become one again,” he said.

The chief outcomes of the summit relate specifically to North and South Korea themselves.

They will introduce buffer zones along the demilitarised zone that divides the two countries since the Korean War (1950-53) ended in a ceasefire but no formal peace treaty.

There will be renewed efforts to reopen the Kaesong joint industrial area, increased road and rail links and more access for relatives divided by the war.

Moon will brief Trump on the summit when he travels to the US next week, while Pompeo said he had spoken to his North Korean counterpart Ri Yong-hoon and invited him to meet next week on the sidelines of the United Nations General Assembly.