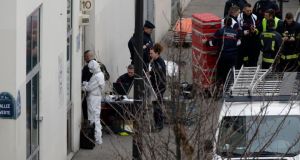 Police investigators and fire fighters work in front of the Paris offices of Charlie Hebdo on Wednesday. Photograph: Reuters

There has been swift and horrified reaction to the murders of 12 people in Paris on Wednesday.

German Chancellor Angela Merkel said the deadly shooting by black-hooded gunmen at a satirical newspaper’s offices was an attack on freedom of speech and the press.

“This abominable act is not only an attack on the lives of French citizens and their security,” Ms Merkel said in a statement. “It is also an attack on freedom of speech and the press, core elements of our free democratic culture. In no way can this be justified.”

He said on Twitter: “We stand with the French people in the fight against terror and defending the freedom of the press.”

And he told MPs: “This House and this country stands united with the French people in our opposition to all forms of terrorism and we stand squarely for free speech and democracy.

“These people will never be able to take us off those values.”

US secretary of state John Kerry said America stood in solidarity with France after the attack.

“Not just in horror or in anger or in outrage for this vicious act of violence but we stand with you in solidarity and in commitment both to the cause of confronting extremism and in the cause which the extremists fear so much and which has always united our two countries - freedom,” he added.

Taoiseach Enda Kenny said the shootings were a direct attack on the basic values of freedom of speech and tolerance. He also said the Government offered its “total solidarity and support to our French colleagues and friends as they work to capture the perpetrators and bring them to justice.”

The Vatican said the attack is “a double act of violence, abominable because it is both an attack against people as well as against freedom of the press”. A spokesman said Pope Francis would likely issue a personal condemnation later on by sending a message to the archbishop of Paris.

And Nato general secretary Jens Stoltenberg said: “I strongly condemn the terrorist attack at the office of the Charlie Hebdo magazine in Paris today.

“This was a barbaric act and an outrageous attack on press freedom.

“My thoughts are with the victims and their families.

“We stand in full solidarity with our ally France.

“All Nato allies stand together in the fight against terrorism. Terrorism in all its forms and manifestations can never be tolerated or justified.”