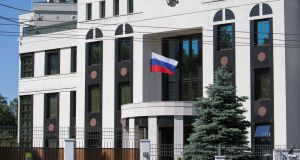 The embassy of Russia in Chisinau, Moldova. “They were declared persona non grata on the basis of information received from the special services,” Moldova’s prime minister Pavel Filip said of the five Russians expelled on Tuesday. Photograph: Viktor Dimitrov/Reuters

Moldova has expelled five Russian diplomats in a move that its pro-Kremlin president has called a western-backed bid to damage the country’s relations with Moscow.

The government and most parliamentary deputies in Moldova support integration with the European Union, but disillusionment with them and a host of corruption scandals helped the Russia-friendly Igor Dodon win a presidential election last year.

Mr Dodon favours restoring strong ties with Moscow, and he appeared to be the only foreign leader to join Russian president Vladimir Putin on Red Square for this year’s May 9th military parade.

His efforts come amid strained bilateral relations, however, and growing friction between his administration and Moldova’s government.

In March, the government banned state officials from visiting Russia after several complained of being mistreated by its security services upon arrival. Some Moldovan officials linked the alleged abuse to their country’s investigation into the suspected laundering of $22 billion (€19.7 billion) in Russian cash through Moldova.

Since 2014 Russia has banned many food products from Moldova, in apparent retaliation for its signing of a major trade deal with the EU, and Moscow supports the separatists who run the breakaway Moldovan region of Transdniestria.

“They were declared persona non grata on the basis of information received from the special services,” Moldova’s prime minister Pavel Filip said of the five Russians on Tuesday.

“We will do everything possible to have good relations with Russia,” he added. “But we want them to treat us with respect, even though we are a small country. We are an important partner.”

Mr Dodon was livid over the expulsions, however, and suggested the US was meddling in the affairs and foreign relations of Moldova – which is commonly regarded as Europe’s poorest state.

“The government has made an outrageous gesture to our strategic partner, the Russian Federation, ” Mr Dodon said.

He pledged to discuss the issue with Mr Putin at an economic forum in St Petersburg this week, and warned of a possible “serious deterioration in Moldovan-Russian relations”.

“I also understand that this was probably done on an order from the West, even from across the ocean, from those who are troubled that the [Moldovan] presidency and the Kremlin finally achieved constructive and effective dialogue,” Mr Dodon said.

Russian deputy foreign minister Grigory Karasin bemoaned “a gross provocation, a blow against those forces in Moldova, led by president Igor Dodon, who really favour normalisation and improvement of bilateral relations with Russia”.

“There will be a response, of course, and it will be pretty tough. But we will think about the forms and parameters of this response,” he added.

Last week, Estonia expelled two Russian diplomats, and Moscow pledged to respond to what it called “an unfriendly and unfounded move”.