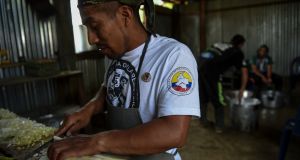 The Andean country and the Revolutionary Armed Forces of Colombia (Farc) rebels signed a peace deal late last year to put an end to more than 52 years of war. The conflict, which also includes a smaller rebel group and paramilitary gangs, has killed more than 220,000 people.

Under the accord, rejected in a public referendum but pushed through by congress, all rebels are required to live in special camps around the country and hand in all their weapons to the United Nations, which is overseeing the demobilisation process.

Rebel commanders, however, complained that the 180-day hand-in period, which expires on Tuesday (May 30th), would not be sufficient because of camp construction delays, including setting up sanitation and housing.

“In a joint agreement with the United Nations and the Farc we have agreed that the arms handover will not end tomorrow as had been planned, but instead within 20 days,” Mr Santos said in a televised speech.

“The change in date does not in any way affect the firm decision and clear commitment of the government and the Farc to comply with the accord,” he said, adding the rebels’ stay in the demobilisation camps would also be extended until August 1st.

Nearly 7,000 rebels have been living in the 26 camps since the beginning of the year. Some commanders will be prosecuted in special tribunals for war crimes, but the majority of fighters will receive amnesty and government support to reintegrate.

Earlier this month the constitutional court struck down two provisions meant to speed up approval of laws tied to the peace deal, which the Farc said posed a threat to the process. A broad peace law has already been approved by Congress, as has the amnesty law, but the ruling will likely extend debate in congress on pending projects about rural reform and political participation for the Farc.

Despite the potential delays, Ms Santos’s coalition has a majority in Congress and looks set to pass the legislation.