Why was the battle of Messines important?

Unlike what followed, Messines was a rare military success 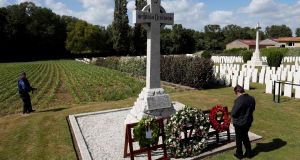 A visitor stands in front of the 16th Irish Division Memorial during the Battle of Messines Ridge commemorations at the military cemetery in Wijtschate, Belgium, on June 7th, 2017. Photograph: Francois Lenoir/AFP/Getty Images 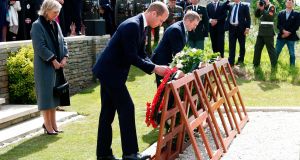 The battle of Wijtschate-Messines in the first World War in June 1917 was the first act in what became known as the third battle of Ypres, a crucial prelude to the main summer offensive on the Ypres salient.

Unlike what followed, however, particularly in the deadly mud fields of Passchendaele, Messines was a rare military success, an advance at far more limited cost than the later battles, and it acquired a special symbolic significance in the story of the engagement of Irish in the war – here, famously, nationalist and unionist men of the 16th Irish and 36th Ulster divisions fought and died side by side.

Their sacrifice is honoured at the Irish Peace Park and tower opened in Messines in 1997. It was close by that Major Willie Redmond MP also died and is buried. The Second Army, of which both divisions were part, was under the command of a talented English officer Lieut Gen Sir Herbert Plumer, who planned the battle and trained officers and men diligently. By June, 24 huge mines had been dug in by tunnelling beneath German strongholds on the Wijtschate-Messines ridge to depths of 20-30 metres, a total of nearly some 400,000 kg of explosives.

At zero hour, 3.10am on June 7th, the mines were blown – the explosions could be heard in England while local people thought they were experiencing a major earthquake. Craters over 100 feet deep still litter the landscape. As Plumer’s righthand man, Gen Tim Harrington, told the press on the eve of the attack, “Gentlemen I do not know whether we shall change history tomorrow, but we shall certainly alter the geography.”

The Irish, tasked with taking Wijtschate ridge, which had been softened up by a massive bombardment, advanced after the mines exploded behind a creeping artillery barrage – although one group of Munster Fusiliers in their enthusiasm moved ahead of the barrage and took casualties.

Later, the 33rd brigade of the 11th Northern Division, out beyond Wijtschate, would also take heavy own-fire casualties – 24 officers and 423 other ranks killed, wounded or missing, the equivalent of 40 per cent of the casualties of the entire 16th Division that day.

The front line advanced three kilometres east in the push. German losses were put at 20,000 to the Second Army toll of about 11,000.

The 16th, which had lost 4,330 killed, wounded, or missing at Guillemont and Ginchy on the Somme the previous September, lost 1,183 in three days; the Ulster Division, some 1,119 officers and men. Its losses at Thiepval had totalled 5,104.

Heavy as these casualties were, however, they paled in significance compared to the slaughter that would come in August at the unmitigated disaster of Frezenberg Ridge and when the rains came in the mud-soaked fields of Passchendaele where hundreds literally drowned in the deep waterlogged shell-holes. And where blinkered Gens Gough and Haig, who felt they had nothing to learn from Plumer, would all-but destroy much of what was left of both Irish divisions.