Who was Willie Redmond and why is he fondly remembered at Messines?

‘He had had difficulty persuading the War Office to let him lead his men into battle, but was allowed to lead the third wave assault on Wijtschate’ 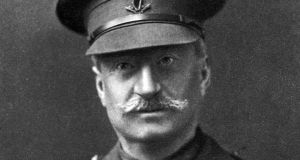 Willie Redmond MP, at the mature age of 53, unfit and overweight, signed up in February 1915 to join the Royal Irish Regiment.

A popular politician and a proud nationalist, he had been inspired by his brother John, until then the undisputed leader of nationalism, who had called on supporters in the Irish Volunteers to go “wherever the firing line extends in defence of right, of freedom and of religion” to fight for the British empire in defence of small nations.

“If in the time to come, “ Willie would say,”we in Ireland could not show we had struck a blow for Belgium, then indeed I believe that our name would be disgraced.”

Speaking one last time in the British House of Commons in March 1917, in uniform and back from serving on the Somme, he once again appealed for reconciliation in Ireland.

He had had difficulty persuading the War Office to let him lead his men into battle, but was allowed to lead the third wave assault on Wijtschate.

He did so in his usual style. He had, one witness recalled “a joke and a smile for every man and as we flew over the parapet to shouts of ‘Up the County Clare’, Major Willie showed us a clean pair of heels.” Within moments he had been hit in the wrist and legs. Weakened by age, the exertion and the life in the trenches for which he was ill-equipped, the wounds would prove fatal.

He was carried back under fire to the safety of a field dressing station by a Private John Meeke, a stretcher bearer of the 11th Royal Inniskillings.

Meeke, who was also wounded in the process, would receive the Military Medal for his actions that day.

Redmond’s death was widely mourned at home and there were messages of condolence from the Pope, King George V and fellow MP Edward Carson. His friend, the nationalist MP Sir Walter Nugent, said simply “he was too good for politics”.

Redmond was buried in the grounds of the convent at Locre where he was commemorated on Wednesday at the Messines commemorations with the unveiling of a new monument commissioned by the local authority of Heuvelland. The steel silhouette depicts Redmond being carried off the field of battle by Meeke. Wreaths were also laid at his grave.