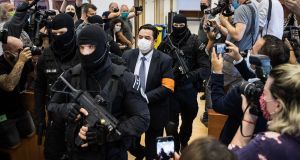 An influential Slovak businessman has been cleared of ordering the murder of investigative journalist Jan Kuciak, prompting the country’s leaders to call for renewed efforts to solve a case that sparked street protests and political turmoil.

A panel of judges found there was not enough evidence to convict Marian Kocner and associate Alena Zsuzsova over the killing of Kuciak and his fiancée Martina Kusnirova, who were shot dead in their home in February 2018.

The murders brought tens of thousands of people on to the streets of Bratislava and other Slovak cities to demand an end to impunity and hidden links between politics, business and organised crime in the EU state.

The crisis forced Slovakia’s then prime minister Robert Fico and several other senior officials to resign, and revelations from the investigation into the killings have led to the detention of politicians and judges on suspicion of corruption and obstruction of justice.

“The court’s verdict shocked me, and I need to understand its reasoning. I respect it, but I expect the search for justice will not end, and will continue in the supreme court,” Slovak president Zuzana Caputova said on Thursday.

Prime minister Igor Matovic, who came to power on an anti-corruption platform this year, ousting Mr Fico’s party from government, said: “It seems that now the apparent murder plotters want to slip out of the clutches of justice... Let’s hope justice awaits them both.”

The court sentenced Tomas Szabo to 25 years in jail on Thursday for helping to carry out the murder, after earlier handing down a 23-year sentence to gunman Miroslav Marcek.

A third man, Zoltan Andrusko, agreed to co-operate with investigators and received a 15-year prison term last December for his role in the crime.

Prosecutors alleged that Mr Kocner asked Ms Zsuzsova to arrange the murder of Kuciak – who had written about his business affairs – and she engaged Andrusko as a go-between who hired ex-soldier Marcek and his cousin Szabo to carry out the hit.

Marcek and Andrusko admitted their guilt, but Mr Kocner and Ms Zsuzsova have always denied involvement in the killings.

“I am not a saint, but I am not a murderer either. I’m certainly not a fool who wouldn’t realise what a journalist’s murder would lead to,” the businessman told the court in July.

He is now appealing against a 19-year jail term he received separately for financial crimes.

Outside the courthouse on Thursday, Kuciak’s father Jozef said he felt “paralysed” by the verdict.

“It’s clear that justice hasn’t come to Slovakia yet,” said Ms Kusnirova’s tearful mother Zlatica. “Someone powerful is still pulling the strings, and unfortunately we don’t have those strings...Our children are in the grave and Kocner is laughing.”

State prosecutors and lawyers for the victims’ families said they planned to appeal against the verdict, which caused dismay among international media watchdogs and rights organisations.

Dunja Mijatovic, human rights commissioner for the Council of Europe, said the ruling showed “there is still work to do to ensure justice and prevent impunity”.

“This is owed to the families and colleagues of both victims, as well as to Slovak society at large.”