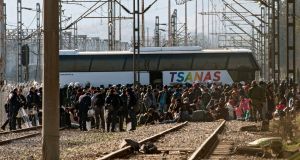 Greek policemen removing Afghan migrants from the border and conducting them to the bus, near Gevgelija, Macedonia. Photograph: Georgi Licovski/EPA

The European Union has warned of a possible humanitarian crisis in Greece, which is struggling to cope with rising numbers of migrants trapped on its territory.

Greek police ushered hundreds of asylum seekers on to buses and sent them back to Athens today from the border with Macedonia, which since Sunday has tightened controls on who is allowed to enter the country.

Now only Syrians and Iraqis with passports can cross from Greece to Macedonia and board trans-Balkan trains directly to Slovenia’s border with Austria, from where most move on towards Germany and Scandinavia.

Greece is under huge pressure to reduce the northward flow of refugees and migrants, and reacted angrily to Austria’s decision not to invite its officials to Vienna for talks tomorrow with ministers from other Balkan states.

“We call on all countries and actors along the route to prepare the necessary contingency planning to be able to address humanitarian needs, including reception capacities,” they said in a joint statement.

About 5,000 people were stuck at the Greece-Macedonia border on Monday and today, as several thousand more arrived on mainland Greece from islands near Turkey, ramping up pressure on Athens’ strained capacity to house migrants.

Leaders of central European and Balkan states have increasingly focused on halting large numbers of migrants on Greece’s northern border, having seen little effect from EU efforts to persuade Turkey to stop people making the perilous crossing to Greece.

The International Organisation for Migration said today that more than 110,000 migrants had reached Greece and Italy so far this year – more migrants than travelled to Europe in the entire first six months of 2015.

Last week, Austria announced that it would allow a daily maximum of 80 people to claim asylum, and permit no more than 3,200 people to enter its territory in one day.

Vienna’s move prompted Balkan states to set up the joint refugee registration and train departure point on the Macedonia-Greece border, to allay fears that large numbers of migrants and refugees could be trapped on their territory if countries to the north introduced further restrictions.

The UNHCR criticised “restrictive practices adopted in a number of European countries that are placing additional undue hardships on refugees and asylum seekers across Europe, creating chaos at several border points, and putting particular pressure on Greece as it struggles to deal with larger numbers of people in need of accommodation and services”.