Vast open-cast mine protest ends as German police move in 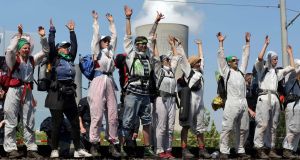 Climate activists occupy railtracks close to the Garzweiler brown coal mine in western Germany during a weekend of protests. Photograph: DPA/AFP

Germany’s largest climate protest in decades ended on Sunday when police moved in to clear a lignite mine stormed by thousands of climate protestors.

Dwarfed by massive machinery, racing around what looked like the set of a dystopian science-fiction film, thousands of protesters in white overalls engaged in cat-and-mouse tactics with police on Saturday.

Eventually about 6,000 slipped past police cordons to enter the mine in Garzweiler, an hour northwest of Cologne. It is a 48sq km open-cast mine that supplies lignite, or brown coal, to power stations in the region and is owned by energy company RWE.

Nike Malhaus, spokeswoman for the protest group Ende Gelände, which translates roughly as “End of Story”, said the protesters had made “history”.

“Never before were so many people determined. Time is running out and the climate crisis demands an immediate withdrawal from coal mining,” she said. “Because politics has failed, we made sure the coal diggers were halted.”

The protest, which stopped mining in the facility, was part of a weekend of protest in the Rhineland region in which tens of thousands of people demanded Germany move forward the end of mining from the current plan of 2038.

Most of the protesters spent the night in the vast, dusty, yellow landscape until Sunday when police – some on horseback – moved in to clear the area.

A spokeswoman for protesters said a “short escalation” took place when police moved in before the agreed 10am departure time on Sunday morning.

Police said eight officers were injured in protests; demonstrators said several of their number were receiving medical treatment in hospital.

Events kicked off on Friday when up to 40,000 young activists from 17 countries descended on Aachen, near the German border with Belgium, for the country’s biggest ever Fridays For Future demonstration.

Also on Friday, about 500 demonstrators held a sit-down protest on a train line, blocking the supply of coal to one of Germany’s biggest coal-fired power stations, Neurath, 60km northeast of Aachen.

On Saturday, while other protesters struggled to get into Garzweiler, some 8,000 people protested in the nearby town of Keyenberg which is earmarked for demolition by plans to expand the mine.

With Germany and central Europe facing temperatures of near-40 degrees this week, concerns over climate change have reached the wider German population – and politicians.

CDU leader Annegret Kramp-Karrenbauer has admitted that the party needs to up its game regarding climate policy and has vowed to present a new policy document by September.

“I have made clear we have to work hard on our concepts and will start an intensive process regarding energy taxes and levies,” she said, admitting the slump in support was voters telling her party: “Please get your act together.”

Nervousness is growing among CDU rank-and-file that they chose the right leader last December to succeed Dr Merkel. Seven months after taking over, a new poll places 56-year-old Ms Kramp-Karrenbauer with just 36 per cent public support – Germany’s 11th most popular politician – down from second place in January.