Comrades in synch as Xi lays out bold vision for China 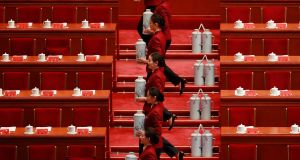 Stewardesses prepare tea flasks for delegates before the opening ceremony of the Communist Party congress. Photograph: How Hwee Young/EPA

Just over an hour into Xi Jinping’s opening speech at the 19th Communist Party congress, and 12 young women in purple jackets and black trousers appear carrying flasks. They take up position at the end of each row of delegates on the dais in the Great Hall of the People, before moving along the cadres, in step, topping up the teacups.

Everything at the twice-a-decade gathering is stage-managed – this is synchronised politics. How the 2,300-plus delegates applaud in unison, the rustle as officials turn their pages as one. The 10 red drapes flanking a golden hammer and sickle against a yellow curtain.

The only asymmetric element onstage is Xi himself. He stands at a large podium to the left of the dais, hands on the lectern. Delivered in an even tone, addressing his “comrades” between points, Xi’s nearly 3½-hour speech shows how the president, general secretary of the party and military chief has grown in confidence since he ascended to the pinnacle of power in China five years ago.

Xi’s delivery didn’t have the showmanship of other world leaders, although he did mention achieving a “beautiful China”, perhaps a nod to his US counterpart Donald Trump. The character of Xi’s speech was of a different order, offering one basic message – the prospect of a better life the Communist Party way.

Xi used the Chinese phrase “mei hao sheng huo” (a better life) 14 times during his speech. The audience is reminded that since 2012, more than 60 million people have been lifted out of poverty and more than 13 million urban jobs have been created each year.

“The aspirations of the people to live a better life must always be the focus of our efforts. We must keep on striving with endless energy toward the great goal of national rejuvenation,” he said.

By 2050, China will be a leading global power, and Chinese people will stand “taller and firmer” in the world, he promises. The vast hall applauds in unison.

One area that didn’t work out was the weather – incredibly, there was heavy rain in the morning, presumably to clear the pollution that had arrived despite factory closures and cloud seeding to ensure blue skies.

Behind Xi, Jiang Zemin sat reading the speech with an enormous magnifying glass. Rumours of Jiang’s death, which emerge every few months, certainly seem to be greatly exaggerated. Xi is said to be trying to reorganise the leadership to escape the residual influence of the 91-year-old former leader. Also on the podium was Xi’s immediate predecessor, Hu Jintao.

For all the synchronised politics, this is still the most important glimpse we get of the workings of power in the world’s second largest economy and most powerful emerging nation.

The crackdown on civil society in the run-up, and fears of economic slowdown, are not on the agenda.

The whole production is slick and geared for the domestic audience, which is ultimately all that matters. The image projected is of a party firmly in control.