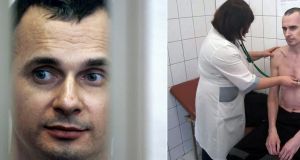 Russian prison authorities announced on Friday that Oleg Sentsov, a Ukrainian writer, film-maker and political activist, had ended his hunger strike after refusing to ingest food for more than 140 days in a jail in Arctic Siberia.

Valery Maksimenko, the deputy head of the Russian Federal Penitentiary Service, said Mr Sentsov, who is serving a 20-year sentence on controversial terrorism charges, had been persuaded by doctors to call off his protest and begin eating again. Mr Sentsov had “chosen life”, he told Russian state news agencies.

However, Mr Sentsov denied that he had agreed to give up his hunger strike and said that the prison authorities had threatened to begin force feeding him this weekend. “My opinion is not being considered in this matter,” he said in a statement issued by his lawyers late on Friday.

Mr Sentsov declared an indefinite hunger strike in mid-May, timing the action to cause embarrassment to the Kremlin as Russia prepared to host hundreds of thousands of visitors to the 2018 World Cup.

Russian president Vladimir Putin has refused to meet his demand for the release of all Ukrainian political prisoners held in Russian jails.

Four months of fasting have taken a toll on Mr Sentsov’s health. In a photograph released by the prison authorities last weekend, the emaciated Ukrainian film-maker sits listlessly on a bench as a doctor prods his chest with a stethoscope. Dmitry Dinze, Sentsov’s lawyer, said his client was suffering from heart and kidney problems and that prison doctors had threatened to force-feed him.

On Friday Mr Maksimenko said the “best dieticians in Moscow” had prepared special nutrients to help restore Mr Sentsov’s health. Parts of the Ukrainian prisoners’s digestive tract had atrophied during his hunger strike, he added.

Mr Dinze said the prison service had threatened to begin the painful process of force feeding his client after deciding that the hunger strike “was reaching a point of no return”. Mr Sentsov had a 50:50 chance of surviving the ordeal, Mr Dinze said after a meeting with the Ukrainian film maker on Friday.

Mr Sentsov was arrested in his homeland in Crimea in May 2014, shortly after Russia annexed the Black Sea peninsula from Ukraine. A military court in Russia later convicted him of plotting terrorist acts in Crimea and ordered him to serve 20 years in a maximum security jail.

Human rights groups say the charges were trumped up to punish Mr Sentsov for his political activities. The film-maker had supported Ukraine’s Maidan revolution and spoken out against the Russian occupation of Crimea.

Western governments, rights activists and international cinema celebrities have urged Mr Putin to release Mr Sentsov and all other political prisoners held in Russia, so far to no avail.

Reports that the Kremlin might be ready to exchange Mr Sentsov for the release of three Russian citizens held in US jails, including arms dealer Viktor Bout and Konstantin Yaroshenko, a convicted drug smuggler, as well as the alleged spy Mariia Butina, have been circulating in Russian media over the past week.

However, the Russian foreign ministry dismissed the reports on Thursday as “disinformation”.

Mikhail Fedotov, the chairman of the Kremlin’s human rights council, welcomed Mr Sentsov’s decision to end his hunger strike on Friday. “To fight for your rights is a glorious deed, but it’s completely unnecessary to put your life and health at risk in doing so,” he said.