Ukraine's new NHS may not save ailing presidency of Poroshenko 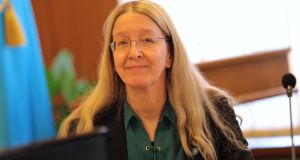 Photographs of two young men hang on the wall above the desk from which Ulana Suprun runs Ukraine’s health ministry.

They are Serhiy Nigoyan, the first protester killed during the country’s 2013-2014 revolution, and Vladyslav Zubenko, who was among dozens of people shot by security forces on Kiev’s Maidan square as the uprising ended in a massacre.

Dr Suprun and her husband Marko had moved to their ancestral homeland from New York as the rallies began, joining an army of volunteers who kept the protest movement and its camp on Maidan going through the depths of winter.

Poroshenko is deeply unpopular for failing to fulfil the revolution’s main demands, but he has strongly supported Suprun and healthcare reform

They were on the square on the revolution’s bloodiest day, February 20th 2014, and gave emergency first aid to the gravely wounded Zubenko, but the 22-year-old from eastern Ukraine died eight days later in a Kiev hospital.

Five years on, Suprun is rebuilding Ukraine’s ailing and graft-riddled health system, but the future is clouded by looming elections that could oust the nation’s post-Maidan leaders and threaten the hard-won achievements of reformers like her.

President Petro Poroshenko is deeply unpopular for failing to fulfil the revolution’s main demands – end corruption, institute the rule of law and ensure it applies equally to all – but he has strongly supported Suprun and healthcare reform.

She has made powerful enemies by cutting Ukraine’s “pharma mafia” out of the state procurement of medicines and stanching the flow of bribes to top doctors, and in a change of president they would see hope of regaining lost revenue.

Surveys ahead of the March 31st presidential elections show Poroshenko is trailing comedian and impresario Volodymyr Zelenskiy and is neck-and-neck with former premier Yulia Tymoshenko; the top two will contest a run-off on April 21st, and Ukrainians will vote again in parliamentary polls in October.

Zelenskiy is a political novice who has avoided public debates and major interviews, and his social media-heavy campaign is light on policy details; Tymoshenko is a populist fond of lavish promises, who described Ukrainian citizen Suprun as a “foreign health minister” sent to “experiment” on the nation’s people.

“The president was very supportive from the beginning and of course a stable political situation would be the best thing for the changes that have been started... These things take a long time and it’s best for us to be able to just keep moving forward,” Suprun said.

“We still have powerful enemies. Some are running for president and some will be running for parliament,” the Michigan-born radiologist told The Irish Times.

Instead of pumping cash into a network of crumbling, overstaffed, underused Soviet-era medical facilities, Suprun says funds will now 'follow the patient'

“All the television stations owned by the oligarchs have been blasting us from the start [because] it’s better for those who want to continue robbing Ukraine that Ukrainians stay poor, sick and not educated, because if you keep people that way they won’t come out on Maidan and stop you taking advantage of them.”

The new national health service of Ukraine gives people a choice of family doctor rather than assigning them to a practice, allows them to make appointments for the first time and lets them check hospitals’ budgets and drug inventories online. Electronic prescriptions and referrals are expected to follow soon.

General practitioners are now paid according to how many patients they see, giving them an incentive to improve their care and services and to invest in their practices, and monthly salaries of doctors and nurses are rising, albeit from a base of about only €200 and €100 a month respectively.

Instead of continuing to pump cash into a vast network of crumbling, overstaffed and underused Soviet-era medical facilities, Suprun says funds will now “follow the patient”, leading to lower costs and fewer opportunities for corruption.

In less than a year, 26 million Ukrainians – well over half the population – have signed up with a GP under the new system, vastly exceeding expectations.

Since 2015, Ukraine has procured drugs and medical equipment through UN agencies and other international bodies, slashing costs by 40 per cent and allowing the country to buy more supplies with the hundreds of millions of euro saved.

Before the revolution, procurement was dominated by politically connected drugmakers and distributors that rigged tenders and siphoned off cash, driving up prices and causing shortages; in that underfunded and inefficient system, patients who were entitled to free care actually had to pay about half their medical costs, feeding a vast black economy of bribes.

Vested interests in parliament continue to attack Suprun (56), who last month was briefly suspended from office after a politician filed a complaint against her in a Kiev court notorious for its dubious decisions.

Suprun has now been acting health minister for almost three years, because of government fears she may lose a vote to appoint her permanently; despite the antipathy of some in parliament, however, she was recently named Ukraine’s top reformer by the respected Novoye Vremya magazine.

“Is there pushback from the old system? Of course, because it’s what they know and how they make their money,” said Suprun, whom critics have called “Dr Death” and accused of committing “genocide”.

“Nobody said changing the country was going to be easy. But we’ve done more in five years than happened in the 23 years [of independence] prior to that,” she added.

It might not be enough to secure a second term for Poroshenko (53), whom opponents say failed to use his post-Maidan mandate to end decades of oligarchic rule.

Yet Suprun believes Ukraine’s new health system – and Ukrainians’ desire for change – will survive whatever political upheaval lies ahead.

“The people of Ukraine have tasted what universal healthcare should be and they don’t want to go back . . . The hospitals and physicians and patients are now expecting the next thing and then the next thing,” she said. “Anything could happen. But I’m confident that we’ve moved forward in such a way that we’ve created new institutions and pretty much destroyed the past.”