European Union is 'prepared for the worst, but hopes for the best', says Tusk

March 29, 2019 was set as the date for the UK's departure from the EU, as the deadline approaches British prime minister Theresa May has requested an extension from the European Union. Video: UK Parliment TV/ European Council 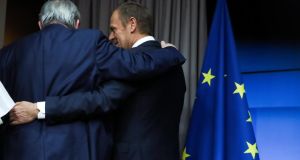 The European Union is “prepared for the worst, but hopes for the best”, European Council president Donald Tusk has told a press conference at the conclusion of the European summit in Brussels.

Discussing the Brexit extension deal hammered out after hours of talks on Thursday, Mr Tusk said: “Personally I am really happy about this development.

“As I said yesterday, it means that until April 12th, anything is possible – a deal, a long extension, if the United Kingdom decided to rethink its strategy, or revoking article 50, which is a prerogative of the UK Government.

“The future of Brexit is in the hands of our British friends.

“As the EU, we are prepared for the worst, but hope for the best.” As you know, hope dies last, he said.

On Thursday, European Union leaders agreed to postpone Britain’s departure by almost two months until May 22nd if MPs at Westminster approve British prime minister Theresa May’s Brexit deal next week. If they fail to do so, Britain will leave the EU on April 12th, just two weeks after the planned exit date of March 29th, unless it chooses to hold European Parliament elections at the end of May.

Mr Tusk added: “We were and will be really determined to achieve the best possible deal, but almost everything is now in the hands of the British parliament and Theresa May’s government.”

Asked whether he would like the UK still to be a member of the EU by this time next year, Mr Tusk smiled as he said: “You know my position, I’m more pro-British than you.” After a reporter drew a parallel between the EU’s relations with the UK and China, he added:

“To me, the UK is still a member of our family, not a rival.”

Asked whether the decision to delay Brexit had simply allowed Mrs May to “kick the can further down the road”, European Commission president Jean-Claude Juncker said: “The road the can has in perspective is a very short one.”

Standing alongside Mr Tusk at the European Council summit’s concluding press conference, Mr Juncker joked about the twin themes of this week’s talks, revolving around EU relations with the UK and China.

Earlier on Friday, France said Britain would crash out of the European Union on April 12th if it fails to ratify the Brexit withdrawal agreement and present a new plan, putting it at odds with other member states which adopted a softer stance.

President Emmanuel Macron has been the most forthright among EU leaders in wanting to draw a line under Britain’s Brexit crisis quickly to refocus on pushing forward the bloc’s agenda. Some, including Germany, have instead stressed the need to make every effort to ensure a chaotic exit is avoided.

A day after EU leaders in Brussels handed Britain a final chance to leave the bloc in an orderly fashion, disagreement broke out over the definitive deadline.

An official in Mr Macron’s office said there would be no further extensions, even to implement the exit: “No, April 12th is the leave date.” European Commission officials said that April 12th was “the new March 29th” – the previous exit date.

Others said the summit conclusions were not so clear-cut. “If there is no indication that they are going to run European elections... there is no ability to extend further,” Minister of State for European Affairs Helen McEntee said. “But at the same time, it doesn’t mean that on April 12th that is the end date.”

Dutch prime minister Mark Rutte said the legal deadline, assuming Britain does not participate in the May 23rd-26th European Parliament elections, was June 30th – the date the British prime minister had originally sought an extension until.

A senior EU diplomat echoed the view that there could be wriggle-room for further delays.

“My reading is rather in the direction that April 12th is the new March 29th,” the diplomat said. “The door is left open for another extension.” – Agencies