Europe Letter: Painfully often, Irish figures in any given room in Brussels are linguistically limited 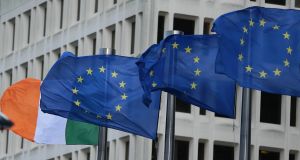 ‘Ireland is in an Anglophone bubble that will be a disadvantage now that its future lies in the European Union.’

Ireland is in an Anglophone bubble that will be a disadvantage now that its future lies in the European Union while both Britain and the United States are in retreat as global powers. It’s time for the bubble to be popped.

Irish people coast on the status of English as an international lingua franca. To a certain extent this is an advantage – Irish speechwriters are in demand in Brussels – but it is also marginalising.

The Anglophone bubble means that Irish people are more familiar with the dynamics of the US Congress or Westminster than they are with matters with quite direct import for the country and the internal EU balance of power, such as who may replace German chancellor Angela Merkel or the upcoming presidential race in France.

There’s nothing surprising or unusual in the low level of foreign language skills we have in Ireland. It’s not due to a unique failing in our schooling system

It may be contributing to the shortage of Irish people joining EU institutions. Just five Irish citizens entered the concours recruitment programme for the EU institutions in the last five years – far below the level needed to replace those retiring, and potentially making for a shortage in influential positions in years to come.

For Ireland to function effectively in the EU, this will have to change.

With Britain’s exit from the EU, Ireland has lost a major ally in defending its interests. To advocate for itself now, the country will need multilingual advocates who are fluent not just in different languages but also in the history and culture of our EU allies.

Painfully often, the Irish figures in any given room in Brussels are linguistically limited, and it shapes their opportunities and how people behave towards them. It’s assumed that English should be used for the Irish person’s benefit, that translation will be required if other languages are used, and it excludes the Irish person from conversations, opportunities, and involvement.

The same goes for most British, American, or Australians as fellow Anglophones, but in Brussels now it’s just the Irish in the room.

Discussion of the issue often rapidly descends into psychodrama and self-flagellation, with an outpouring of old grievances about school experiences and complex feelings towards Irish.

Please resist reacting to this article along these old familiar lines. There’s nothing surprising or unusual in the low level of foreign language skills we have in Ireland. It’s not due to a unique failing in our schooling system.

This is a phenomenon that is common to all the Anglophone countries, and it’s because we can get away with it. The sheer amount of media produced by Britain and the US and their cultural clout means that Irish people can easily live in a comfortable bubble of English and never need venture out of it. Exposure to other languages is simply drowned out by the volume.

The situation is different for people in countries in which the dominant language is something other than English. They will come up against English all the time, whether in the films on in the cinema or the songs of their favourite popstars, alongside the imperative that to learn broadens horizons.

We err in Ireland in sometimes thinking that we can only afford one other non-English language. A typical European might in different scenarios grow up using a local language, one or more “official” national tongues, English, and whatever is spoken in the countries next door. Multilingualism is a global norm, not the exception, as is several languages being used within families.

In a typical day in my job, I might be responding to emails in French, organising a delivery in Dutch, making calls in Italian, following a press conference in any of the other 27 EU languages, and with a cúpla focal here and there as Gaeilge through a press conference with Micheál Martin or texts with a friend.

As is the norm, my comfort level in different languages varies according to the scenario and how frequently I’m using them. Mostly, my speech is clumsy and error-strewn, but every bit of knowledge I have of languages is concretely and practically useful in my everyday life.

How to pop the Anglophone bubble in Ireland is a challenging question, but I do have one idea based on my own experience.

Classroom learning of languages never worked for me. But I found exposure to real-life use of languages transformational. Whether visiting the Gaeltacht as a teenager or on an exchange to Italy, I found that when the language was used around me and I needed to adopt it to communicate, I became conversant within weeks.

My suggestion is therefore that Ireland should become the EU’s strongest advocate for expanding take-up of the Erasmus programme and extending it to exchanges at secondary school level. It’s something that has the potential to transform the lives of young people, but may also be seriously important for Ireland’s strategic interests in the years ahead.