Shellshock in Brussels after Commission blunder

British minister Michael Gove has criticised the EU for invoking Article 16 of the Northern Ireland protocol in a row over Covid-19 vaccine shortfalls, saying none of the conditions for invoking article 16 were met. Video: Reuters 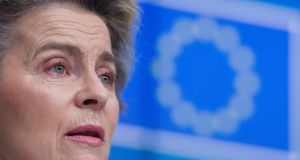 In Brussels, Irish officials remain shellshocked by how they were blindsided by the European Commission’s surprise inclusion of the contentious Article 16 in a regulation, in a decision that was frantically reversed after urgent calls from Dublin.

In a post-Brexit environment in which British prime minister Boris Johnson is presenting a speedy vaccine rollout as a bonus of having left the bloc, it’s unhelpful that the affair seems to live up to the worst EU stereotypes.

“It’s such a gift to the Brexiteers,” an Irish observer lamented. “They’re all saying things like: I’ve never been so proud to have voted for Brexit… Ireland is treated as a colony… of course they are going to run and run with this.”

The affair – in which officials had enough technical knowledge about Northern Ireland to identify it as a potential loophole for vaccine controls and to cite the clause of the protocol to fix it, but not enough political awareness to realise the implications – is seen as a quintessential commission mistake.

Though hastily retracted, the fact remains that the formerly taboo article was put on the table on Friday, handing a permanent boon to opponents of the Northern Ireland protocol who had been calling for its use as a way to get around Irish Sea checks. Invoking it just weeks into the new arrangements took the ground out from those who had been insisting it could almost never be used.

And the principle, which would have allowed EU capitals to refuse permits for exports of vaccines to Northern Ireland – albeit only if they believed they were really intended for Britain – undermines the authority of the EU as a defender of the open border after years in which it insisted any barrier for goods between the Republic and the North was unthinkable.

It has also unleashed a tide of pent-up frustration about commission president Ursula von der Leyen from the EU institutions, not helped by a perceived attempt to shift blame for the error on to the team of her trade chief Valdis Dombrovskis.

The impetus for introducing vaccine export controls is seen as emanating from Germany: a ripple effect from turbulent domestic politics as rivals vie to be chancellor Angela Merkel’s successor.

Von der Leyen – a two-time cabinet minister of Merkel governments – often appears to have one eye on Berlin.

She keeps a tight, German-flavoured inner circle that is often the subject of grumbles from commission officials, who say the gang can be parsimonious in sharing information and can shut out relevant experts in their enthusiasm to get a favoured policy done.

Habitual ire from the Brussels press corps was aired afresh when von der Leyen gave her first interview after the blunder to German broadcaster ZDF. Rather than taking questions publicly at any point, she opted for closed-door meetings with MEPs, after which some complained that the commission president had smoothly sidestepped answering their questions with platitudes.

The insistence on control and frequent reliance on stiff, pre-recorded videos is self-defeating, because behind the scenes von der Leyen is a polished and likable speaker .

Irish figures have called for clarity on what led to the error and changes to procedure to ensure the right people’s phones ring in future. And the unhappiness of MEPs could spell trouble to come.

Von der Leyen was approved as commission president by a margin of only nine votes. This reflected unhappiness at the circumstances of her appointment: by custom, the lead candidate of the largest political group is slated for the role.

But in 2019, the unconvincing Manfred Weber of the European People’s Party was jettisoned by the leaders of national governments, who in a bout of backroom horse-trading produced von der Leyen as an alternative . At the time, she left Germany under something of a cloud due to scandals during her tenure at the defence ministry. The past week has clouded her reputation in Brussels, too.