UK expected to opt in to extension of Europol powers 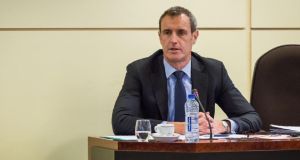 Europol’s director Rob Wainwright says about 40 per cent of its cases have some UK involvement. Photograph: Aurore Belot/AFP/Getty Images

In the aftermath of the Berlin Christmas market attack that left 12 people dead, Britain now looks certain to opt into an extension of powers from May 1st for the EU policing agency, Europol – despite a parallel commitment by London to begin Brexit negotiations as early as the end of March.

The decision on how to handle the new powers, agreed after the terror attacks in Paris and Brussels in 2015 and early 2016, will be the first real test of how UK prime minister Theresa May’s government deals with the complexities of leaving the EU while remaining part of its core institutions.

The aim of the new powers is to make Europol more flexible and collaborative. It should become faster and less bureaucratic in setting up specialised units to deal with emerging threats in terrorism and serious crime – and as a result, ideally, more effective before and after events such as terror attacks.

In return for that increased capacity, both the European Parliament and national governments will be allowed greater scrutiny of how Europol works, and there will be new regulations to strengthen data protection given the inevitable increase in the quantities of raw intelligence being exchanged.

The implications of a possible UK withdrawal from Europol as part of Brexit have been causing serious disquiet in Europe’s capitals, particularly in Berlin where German chancellor Angela Merkel is said to regard intelligence as no less than “Britain’s primary contribution to European collaboration”.

Dr Merkel’s interior policy spokesman, Stephan Mayer, says recent attacks and arrests have underlined co-operation on security as “indispensable”, and warns that Brexit cannot be allowed to become “a moment of weakness” in the fight against violent extremism and terrorism.

If Brexit does lead to a reduction in Britain’s input into the EU’s formal security and intelligence apparatus, Andrej Hunko, an MP with the left-wing Die Linke party in the Bundestag, argues that there could be a largely unanticipated downside in terms of democratic accountability as well.

Mr Hunko believes that a weakening of official EU intelligence structures could lead to a strengthening of informal and arguably less-accountable networks such as the Club of Berne, a voluntary security forum that includes the 28 EU states, as well as Norway and Switzerland, but which is not an EU body.

Ironically, the UK was one of Europol’s founding states in 1998. It is based in the Hague and has about 1,000 staff. Its British director, Rob Wainwright, is a former MI5 intelligence analyst. About 40 per cent of its cases, he estimates, have some level of UK involvement.

As regards the May 1st decision facing the British government, Mr Wainwright tweeted: “ ‘Opt-in’ means UK will remain full member of @Europol after revised regs take effect May 2017 and until Brexit. Important decision.”

The problem for those in Britain who advocate remaining part of Europol is that the agency is very much on the radar of pro-Brexit campaigners because membership involves the organisation accepting the European Court of Justice as the ultimate arbiter in matters of EU law.

The United States, for example, as a non-EU state, is an associate member of Europol and therefore does not have to accept the judgments of the court.

Despite that, Britain’s minister of state for policing Brandon Lewis has said he believes the UK will “opt in” to the new regulations on May 1st because “the UK is leaving the EU but the reality of cross-border crime remains” and “Europol provides a valuable service to the UK”.

On the other hand, members of the House of Commons European Scrutiny Commission acknowledge that a decision to opt in will probably “attract strong parliamentary interest”. As such, they say, it merits a full debate – ideally before January 17th, when they must inform the government of their preferred outcome.

“Co-operation is the way forward when it comes to counter-terrorism, so from a practical perspective it would make sense for the UK to be part of Europol,” said Raffaello Pantucci, director of international security studies at the Royal United Services Institute, a think tank.

“However, the agency became a feature of the Brexit debate, and so I assume the politics will become a lot more complicated than that in the coming months,” he added.