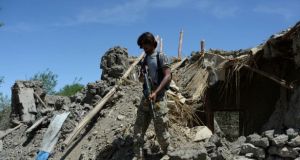 An Afghan soldier patrols near the site of a US bombing during an operation against Islamic State militants in the Achin district of Nangarhar province on Saturday. Photograph: Getty Images

The number of militants killed after the largest non-nuclear weapon ever used in combat by the US military was dropped in Afghanistan has risen to 94.

Ataullah Khogyani, a spokesman for the provincial governor in Nangarhar, said the number of Islamic State (IS) dead rose from the 36 reported a day earlier.

An Afghan ministry of defence official had said the number of dead could rise as officials assessed the bomb site in Achin district.

The US attack on a tunnel complex in remote eastern Nangarhar province near the Pakistan border killed at least four IS group leaders, Mr Khogyani said, and a clearance operation is continuing.

There had been heavy fighting in the area in recent weeks between Afghan forces and IS militants.

The bomb, known officially as a GBU-43B, or massive ordnance air blast weapon (MOAB), unleashes 11 tonnes of explosives. Pentagon officials had described it as the “mother of all bombs”.