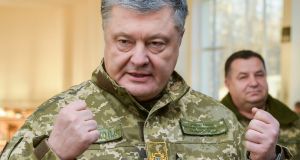 US president Donald Trump has cancelled highly anticipated talks with Russian counterpart Vladimir Putin due to his failure to free three Ukrainian naval boats and 24 crewmen that his forces captured in the Sea of Azov.

“Based on the fact that the ships and sailors have not been returned to Ukraine from Russia, I have decided it would be best for all parties concerned to cancel my previously scheduled meeting,” at this week’s G20 summit in Argentina, Mr Trump tweeted on Thursday.

The announcement came about one hour after Mr Trump had said outside the White House: “I think it’s a very good time to have the meeting. I’m getting a full report on the plane as to what happened with respect to [Ukraine] and that will determine whether I will be meeting.”

The surprise cancellation will be welcomed in Kiev, which urged Nato to send warships to the Sea of Azov following Russia’s capture of the boats and sailors and subsequent imposition of a de facto blockade on Ukrainian ports in the area.

“Germany is one of our closest allies, and we hope that Nato states are now prepared to send naval ships to the Sea of Azov to support Ukraine and provide security,” Ukrainian president Petro Poroshenko told Germany’s Bild newspaper.

“We cannot accept this aggressive policy of Russia. First it was Crimea, then eastern Ukraine, now [Putin] wants the Sea of Azov. Germany, too, has to ask itself: what will Putin do next if we do not stop him?” he added.

....in Argentina with President Vladimir Putin. I look forward to a meaningful Summit again as soon as this situation is resolved!

Dr Merkel said she would discuss the issue with Mr Putin at the G20 summit starting on Friday but insisted there was “no military solution” to the conflict.

“The full blame for this goes to the Russian president,” she said of the latest escalation in a war that began in 2014, when a pro-western revolution ousted Ukraine’s then Kremlin-backed leader, and Moscow annexed Crimea and fomented fighting in eastern Ukraine that has now killed more than 10,300 people.

“I want the Ukrainian soldiers released . . . We must do everything to help places like Mariupol, which depends upon access to the sea. We can’t allow this city to just be cut off, thus indirectly isolating further parts of Ukraine,” Dr Merkel added.

“We ask the Ukrainian side too to be sensible because we know that we can only solve things through being reasonable and through dialogue.”

Kiev described the seizure of its ships as an act of aggression, while Moscow claimed it was the result of a “provocation” by Ukraine to boost the pre-election popularity of Mr Poroshenko.

Ukraine imposed martial law on Wednesday in 10 border and maritime regions, to better prepare for what Mr Poroshenko called the threat of “full-scale war” with Russia, which he claims is massing armour near his country’s frontier.

Dr Merkel also called for commercial ships to be given access to Ukrainian ports on the Sea of Azov, which Russia and Ukraine share as territorial waters under a 2003 treaty.

Ukrainian infrastructure minister Volodymyr Omelyan says Russia has imposed a de facto blockade on the ports, which on Thursday was preventing at least 35 ships from entering or leaving Mariupol and nearby Berdyansk.

Kremlin spokesman Dmitry Peskov insisted there were no such problems and claimed “traffic through the Kerch Strait continues normally”, even though independent shipping trackers showed a major build-up of marine traffic in the area.

Senior Ukrainian officials called on the international community to place restrictions on Russian shipping in response to its blockade of the Sea of Azov and discussed asking Turkey to bar Russian warships from the Bosphorus, under the 1936 Montreux Convention that governs naval transit of the strait linking the Black Sea and Mediterranean.