Japan has opposite problem to Ireland: it is giving houses away 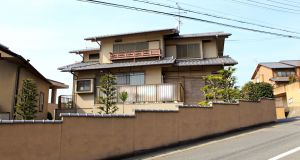 If the thought of trying to buy a family home in Ireland’s super, soar-away property market makes you want to reach for a stiff drink, spare a thought for Japan, which is grappling with the opposite problem: collapsing house and land prices. Local governments are offering subsidies and perks to lure families out of the big cities. Homes in some parts of the country are selling for €5,000 or less and some are going for free.

Urban flight, depopulation and the peculiarities of Japan’s property market have left millions of homes vacant, according to the government. Once a rural phenomenon, decaying, boarded-up houses are popping up in towns and even cities. By 2033, nearly a third of all homes in the country – 21.7 million – could be abandoned, warns a report by the Nomura Research Institute, a think tank.

The akiya (empty house) problem is worsening as Japan’s population ages and shrinks. Every year the young migrate to work in the cities. Many urban dwellers, meanwhile, are set to inherit nearly worthless rural property from their parents when they pass away. Rie Nakaya, a Tokyo housewife, was left a house on a 300sq m plot of land hundreds of miles away when her mother died five years ago. The land is virtually unsellable, she says, and the tottering house must be demolished. “It’s a burden,” she admits.

Unlike Ireland, houses in Japan are considered disposable, a tradition that grew partly out of the need to quickly rebuild cities bombed out during the second World War. Earthquakes, termites and a legacy of flimsy construction help limit the lifespan of an average home to about two decades, after which most are pulled down and rebuilt. Just 15 per cent of homes in Japan are sold second-hand. In Ireland, the figure is about 90 per cent.

The price of land on which houses sit soared during Japan’s good times, but in today’s ageing, placid economy, much land is nearly worthless, says Akio Yamanome, a professor at Waseda University. Land and house prices peaked in the early 1990s before the market fell. In Tokyo (where the population still grows by about 0.8 per cent a year) property and land prices in some areas are sky-high, but the depopulated countryside is a different story.

Much of the land outside Tokyo and the larger cities is not only vacant but has no official owner. A panel of experts reported to the government last year that about 41,000sq km of the nation’s land, fully 11 per cent, is unclaimed. By 2040, it warns, the area could grow to roughly the size of Austria. Without a strategy, they warn, the problem could cost the economy billions of dollars in lost productivity.

The state has lurched into action. A law introduced in 2015 allows the authorities to designate properties as abandoned and order them destroyed if the owners do not respond. But finding the owners can be tricky. And in any case subsidies and property taxes designed to prop up the powerful construction industry mean the country’s builders will probably keep throwing up millions of disposable houses in the coming years.

Across the country, meanwhile, local governments are taking measures into their own hands. Okutama, a scenic town in the mountains that ring Tokyo, is trying to lure young families into vacant homes, donated by local people. Renovations to the houses are subsidised. The aim, Kazutaka Niijima, “head of the town’s office for youth settlement measures”, told the Japan Times, is to stem the dwindling population, which has declined to 5,300 from a peak of 13,800. Half of the remaining residents are 65 or older.

A growing number of authorities now run “akiya banks”, listing vacant properties in their area, along with natural local perks such as surfing beaches, forests and parks. Some older properties are essentially free. The catch, if there is one, is that depopulating towns naturally favour younger married couples, with children. Then there’s that long, long commute to work: Okutama is two hours by train from Tokyo station.