‘This is a democracy’: Three Catalans on Sunday’s referendum 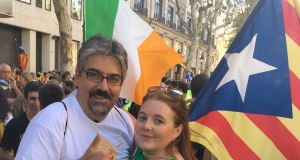 “I am going to vote. I’m going to bring my grandma to vote, and just go with her and express our opinion . . . Because what’s been shown is that Spain is not a democracy for everyone, it’s just a democracy for central government and their ideas. Yes, we are a minority in Spain, but we are a majority in our own nation and we have a right to defend that. Because that is democracy.

“Yes, Spain is built from different nations and there is no argument about that. But the difference here is the will from the people, expressed time after time, the fact that 300 years ago we were in the same situation as we are now shows that this is a constant in the history of Catalunya. We are doing exactly what our grandparents died for in the civil war. Fighting for our rights.”

“It’s like a group of people that have their own opinion, and then they unilaterally hold their own vote and they are saying that holds any power of law but me and my friends we can get together too and say we want to be an independent country. But there’s a constitution of Spain that protects all of its citizens – I’m Spanish – and it’s not being respected.”

“The national animal or emblem for Spain is a powerful black bull, running through a field. Ours in Catalunya is a donkey as we are stubborn and hard-working. We don’t go away, through history they try to cover us in the ground but we are seeds. We are always coming back. There’s no way they are going to get rid of the Catalans and our spirit. Once you have lived here, no matter where you are from, you develop a strong feeling of identity.

“If you are being prosecuted for and not allowed put ballot boxes in polling stations or allowed to cast a vote, regardless of its content, that is not a true democratic country.

“They say the Spanish constitution is an unbreakable law. It tells the police to mobilise and take over our self-government, so they can do that? They can seize control, right? But no, this action must be justified and approved by the senate under their same constitution.

“But this hasn’t happened, it wasn’t voted on so this is in fact a coup on Catalunya by the ruling party in Spain. Approved by the second and third parties in Spain. There are no colours, they are all just protecting a fake democracy and a regime in power for 40 years, that follows on from Franco’s regime. You can’t say on one hand this is unbreakable law, and on the other hand break it.”