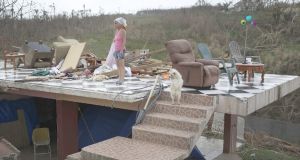 Irma Maldanado stands with her pets in what is left of her home after Hurricane Maria hit Puerto Rico. Photograph: Joe Raedle/Getty Images

The Trump administration has lifted a restriction on foreign vessels transporting cargo to Puerto Rico, amid accusations that the federal government has been too late in responding to a growing humanitarian crisis in the US territory.

After two category four hurricanes hit the island this month, nearly half the territory remained without drinking water, while power outages remained.

President Donald Trump waived the Jones Act for Puerto Rico – a 1920 law that prohibits foreign ships from transporting cargo between ports in the United States mainland and overseas territories. The lifting of the restrictions should allow much-needed supplies to get to the territory sooner, the White House said, amid growing criticism of the response from Washington to the crisis.

A three-star general, General Jeffrey Buchanan, was also appointed by the Pentagon to oversee the emergency efforts, amid concerns that supplies – including 10,000 containers of emergency supplies sitting in San Juan port – were not getting to affected areas.

With some flights due to resume from the island, many cities in mainland America were expecting an influx of refugees from Puerto Rico, as residents of the US territory seek to escape the island, many to join relatives in the mainland. More than a week after Hurricane Maria swept across the territory, businesses and homes still remained without power on the island of 3.4 million people.

Governor of Puerto Rico Ricardo Rosselló said that 11 regional centres were being set up to distribute aid, amid reports of food and fuel shortages.

Speaking to reporters, White House press secretary Sarah Huckabee Sanders said that the “full weight of the United States government is engaged to ensure that food, water healthcare and other lifesaving resources are making it to the people in need”.

She said that Puerto Rico’s island setting meant that there were additional logistical hurdles involved in getting aid to the people that need it, though she added that 49 of the island’s 69 hospitals were now fully operational and there were 7,200 troops now stationed there.

“There is a long way to go but we will not rest until everyone is safe and secure. Our message to the incredible people of Puerto Rico is this: the president is behind you, we all are – the entire country. Your unbreakable spirit is an inspiration to us all. We are praying for you, we are working for you, and we will not let you down.”Mr Trump, who has spoken to the Puerto Rican governor by phone in recent days, is due to visit the US territory next Tuesday.

Meanwhile, three months after he was shot and seriously injured during a congressional baseball practice session, congressman Steve Scalise returned to Congress yesterday on crutches, greeted by a standing ovation in the House. The Republican from Louisiana , the third-highest ranking member of the party in the House of Representatives, was seriously injured after a lone gunman attacked a group of congressmen at an early morning baseball practice session in June in Virginia, just outside Washington DC.

“You have no idea how this feels, to be back at work in the people’s House,” he said as he addressed the chamber, adding: “I’m definitely a living example that miracles really do happen.”

Mr Trump indicated his displeasure with Mr Price this week. Responding to questions from reporters at the White House, Mr Trump said he was “looking into” the situation and that “personally, I’m not happy about it, and I let him know it.”