Theresa May tries to reassure EU leaders and Taoiseach over backstop 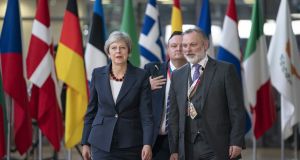 British prime minister Theresa May arrives for a summit of EU leaders in Brussels. Ms May’s problem is that, with so little political room for manoeuvre at home, any sign of a concession to the EU could trigger a cabinet revolt. Photograph: Jasper Juinen/Bloomberg

As Theresa May faced the other 27 EU leaders for the first time since last month’s rancorous encounter at Salzburg, she was at pains to stress the progress that had been made over the past year.

She pointed to last December’s joint report, which agreed to put a backstop in place to guarantee no hard border in Ireland as an example of the two sides’ capacity to find agreement under inauspicious circumstances.

In her bilateral meeting with Taoiseach Leo Varadkar and again when she addressed the 27 leaders, May restated her commitment to a “legally operable” backstop.

This was not a concession but it was an assurance that Britain is not seeking to resile from the commitments it made last December and in March.

After the debacle at Salzburg and the failure of negotiators to reach agreement on a withdrawal agreement this week, it was important for the prime minister to persuade the other leaders that she is serious about finding a solution to the impasse over the backstop. Last night, she asked for their help in finding a creative solution to the “dilemma” of the backstop.

But European Parliament president Antonio Tajani said the prime minister had offered nothing new in her 15-minute address to the ministers.

May’s problem is that, with so little political room for manoeuvre at home, any sign of a concession to the EU 27 could trigger a cabinet revolt.

Downing Street responded gingerly to the suggestion by Michel Barnier and other EU politicians, including minister for foreign affairs Simon Coveney, that the post-Brexit transition period could be extended.

Such an extension would give Britain more time to negotiate a trade and customs deal with the EU and make it less likely that there would be any gap that would require a backstop to come into operation.

But for Conservative Brexiteers already disillusioned by the slow place of Britain’s withdrawal from the EU, the prospect of following EU rules and sending money to Brussels for another year could be too much to bear.